Block building skills are something we may take for granted that young kids will just pick up on and take off with during play time. Not all children have that inherent ability or an interest to get started with blocks. It’s not that they don’t want to build with blocks, but it may be that they can not visualize the process to understand how to begin. Teaching building skills with blocks may sound silly, but it is necessary and we paired our play time together with a fun book that gave us just the right amount of visual modeling! 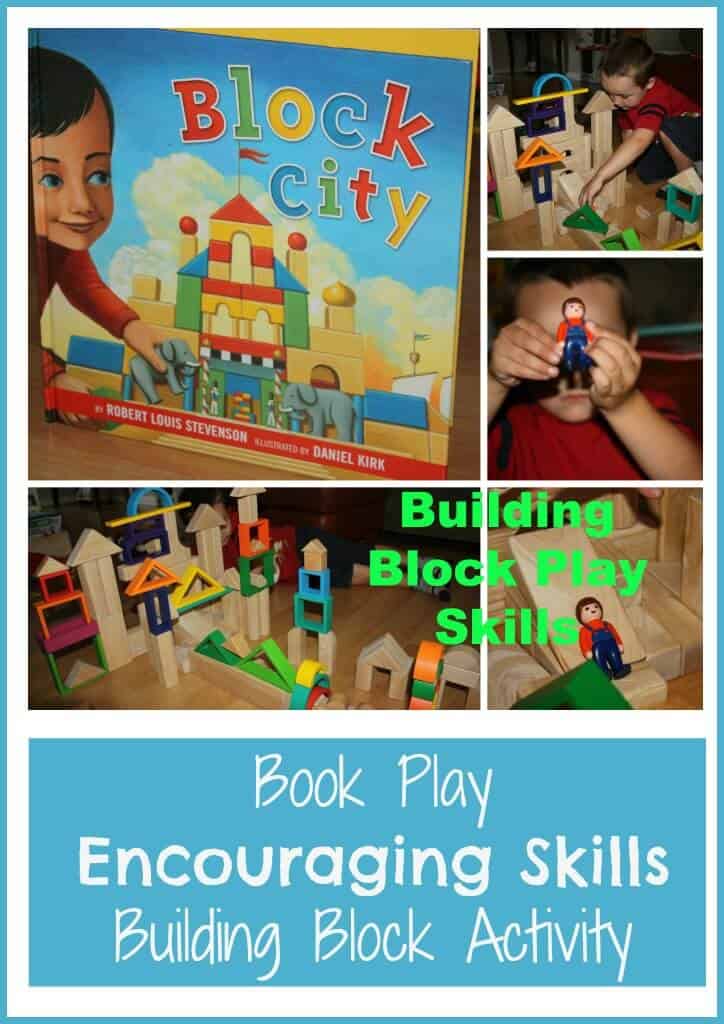 I love blocks and the open-ended play that comes from a great imagination. My son, on the other hand, needs the structure of a picture. He is OK with towers but that is about it, so block play whether with or without a parent is a struggle. It is definitely not an activity for him to get lost in his imagination. Even with suggestions and prompts it is very tough for him to visualize something that he does not have a picture of in front of him. Books can be wonderful learning tools. 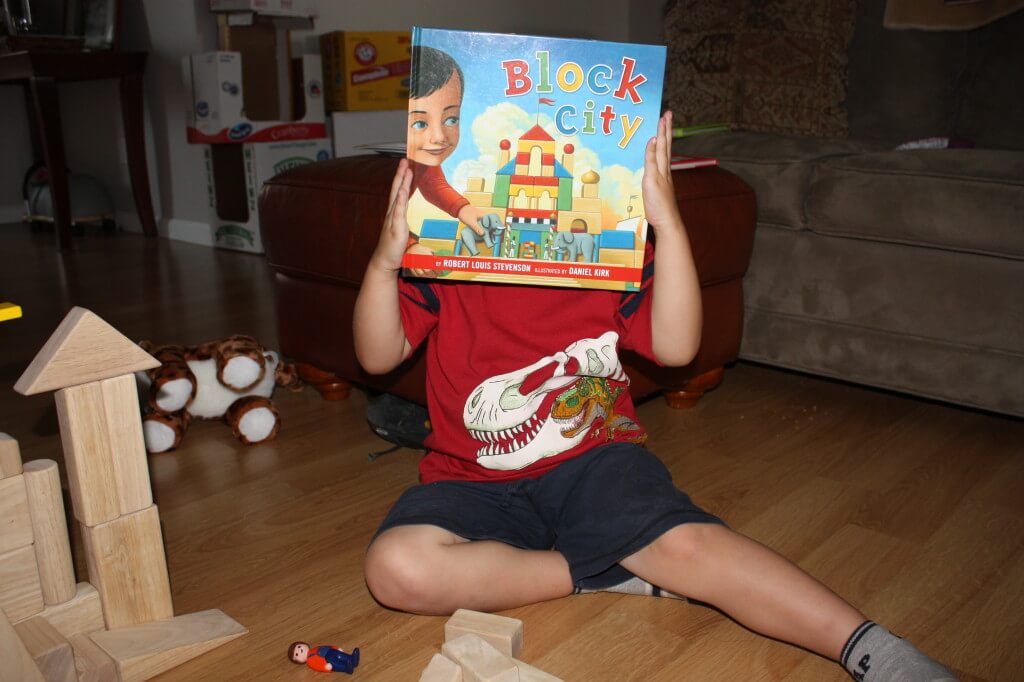 I was gifted a copy of Block City by Robert Louis Stevenson is a beautifully illustrated picture book of a little boy building a palace and a city with all of his blocks, figurines and toys. The author show how the little boy, in his imagination, becomes a part of his building story. The book ends with the boy knocking down his palace and telling about how he can build it again another day. I had always thought this book might help Liam to better visualize the concept of building with his wooden blocks.

Blocks {of all kinds!} We like these plain wooden blocks and these colored wooden blocks. The exact colored blocks we have in this activity are from Lakeshore Learning. 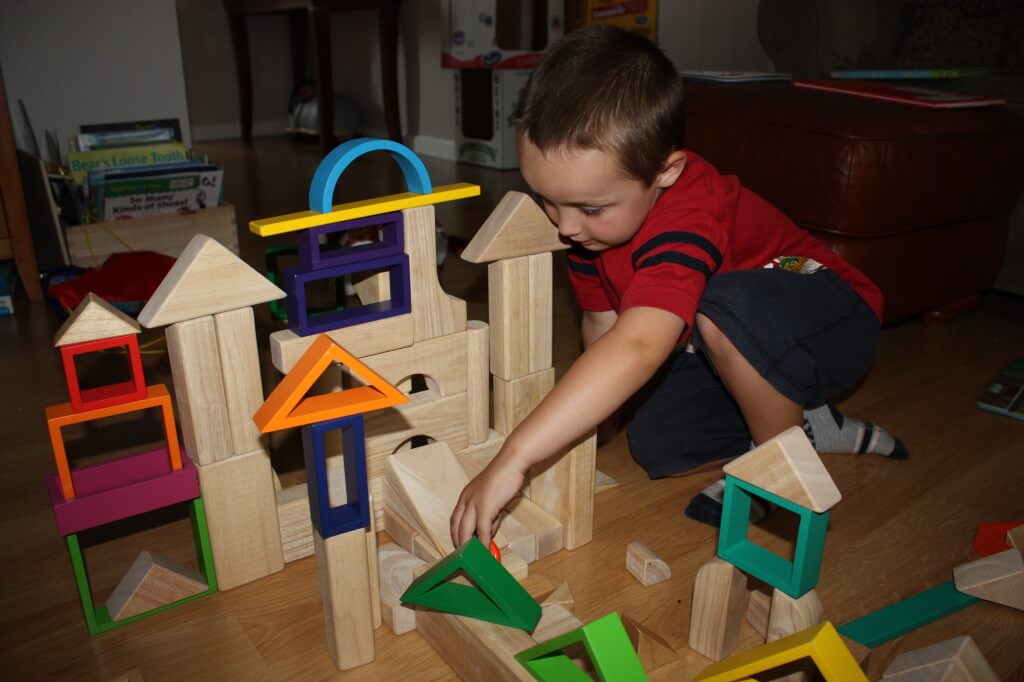 Again, it’s not that he is being forced to play with a toy he doesn’t like. He loves his blocks, but is unable to get started with the building process. Remember not all kids are the same! Adding a fun book about another little kid really helped us work on block building skills. 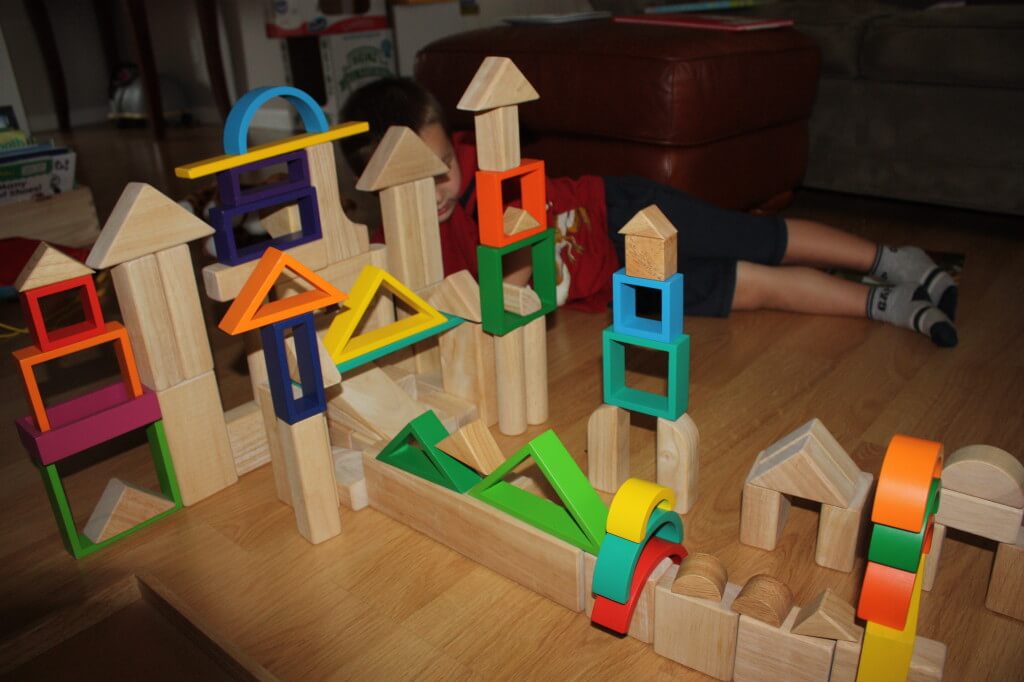 With some prompting, I got him to take blocks out and choose where to put them and I built with him to help give him a bit of structure.  Part way through, he decided that he needed to go find a little boy! Hooray, he was thinking about the story. All on his own, he chose to go upstairs and get a playmobil figurine to use. 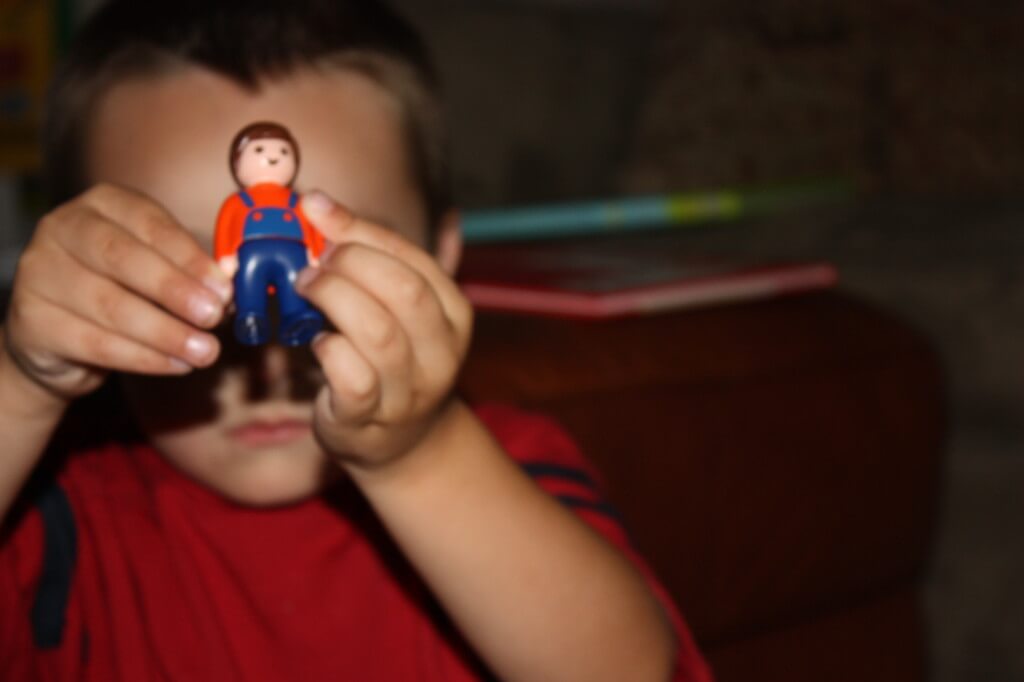 I love how he added a little boy to his very own block city! 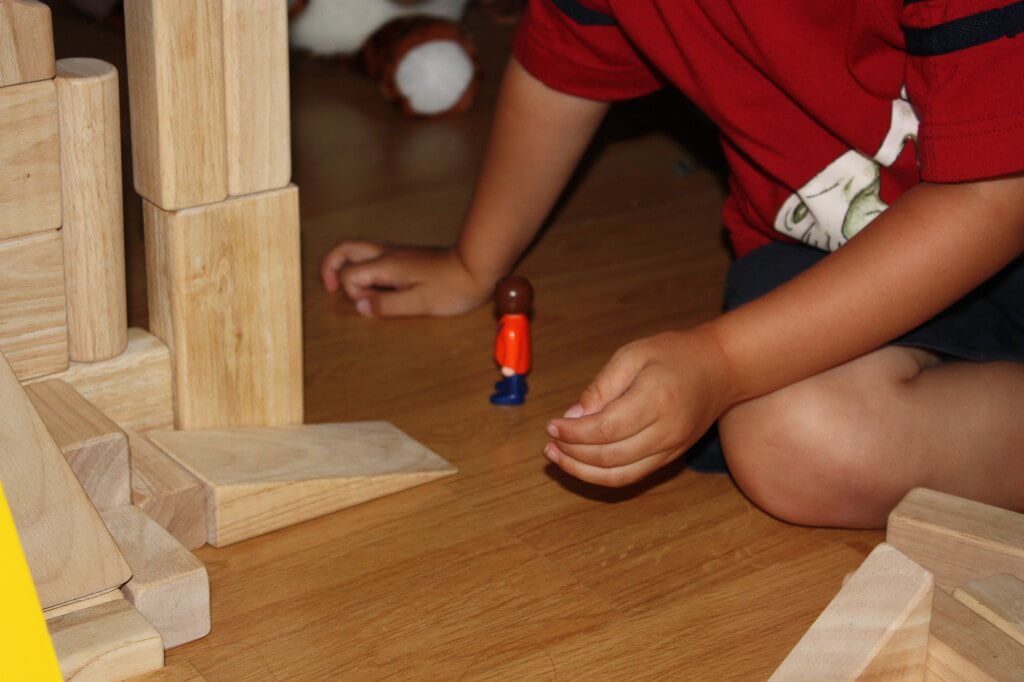 We kept on building. He made the little boy help with the building and he made a slide for him.  When our project was completed, he was of course excited to knock it down. By then end it had become a pretty big set up because there were so many blocks to use up! I can’t say for sure how it will go the next time, but this afternoon was a step in the right direction. 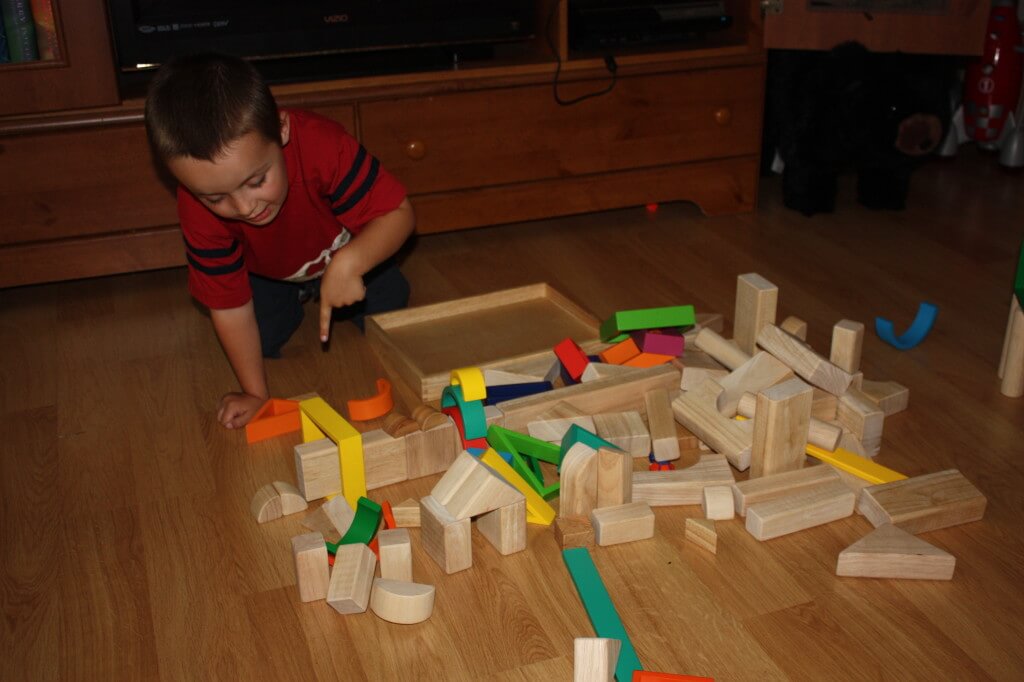 Down goes the city for another day! Blocks are such a versatile building toy and a valuable learning material for early childhood. What will you build with your blocks today? 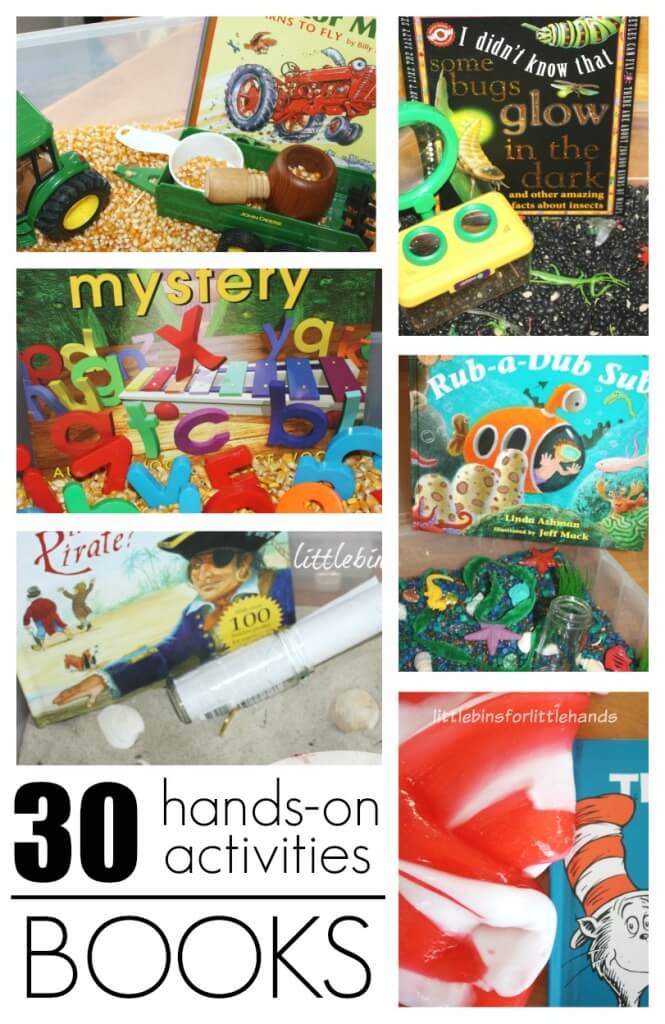