Soap Slime is guaranteed to be a big hit with everyone, adults included! We LOVE slime and usually stick with our traditional homemade slime recipe , but this time we tried something a little different. Check out how this ivory soap slime is actually two fun science experiments for a way cool morning or afternoon project! Get hands-on with sensory science play! 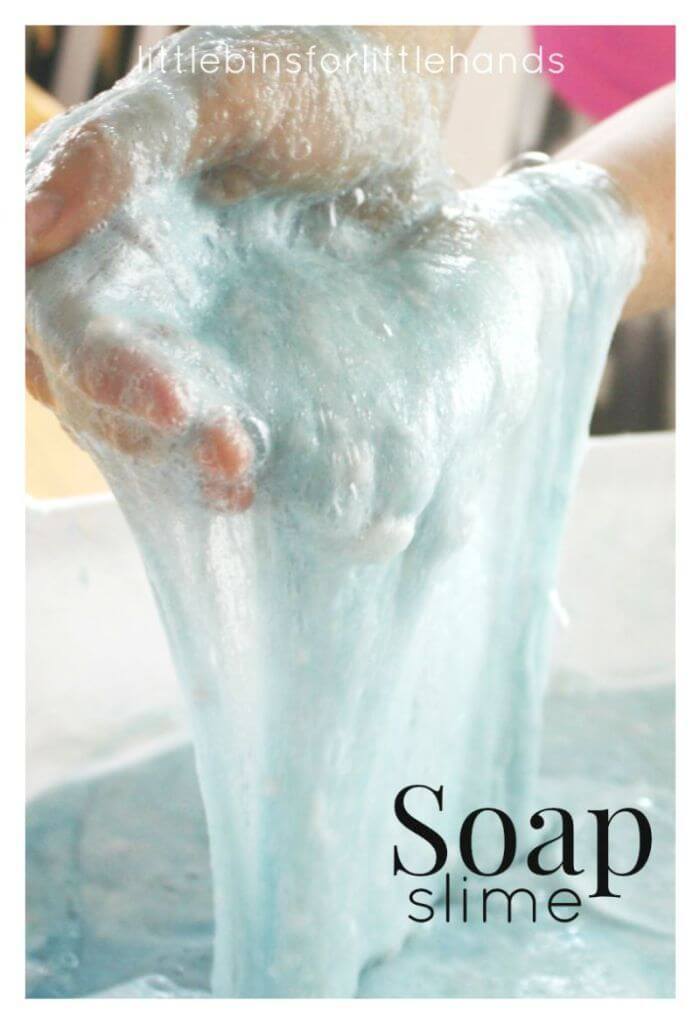 Supplies for soap slime is a couple bars of ivory soap, water, a microwave and container.

Our soap slime is really two experiments in one, and the kids will love it. The exploding ivory soap in the microwave is a classic science experiment. I admit the adults think it is pretty cool too. What we didn’t realize is that we could make soap slime. I love science you stumble upon by testing out ideas, and that is exactly what our soap slime is, a great idea! Also check out… 12 Cool Tactile Sensory Play Recipes Homemade Liquid Starch Slime 30 Preschool Science Experiments

The first step for Soap Slime is to make exploding Ivory soap.

Click photo for details and then come back to read about soap slime. 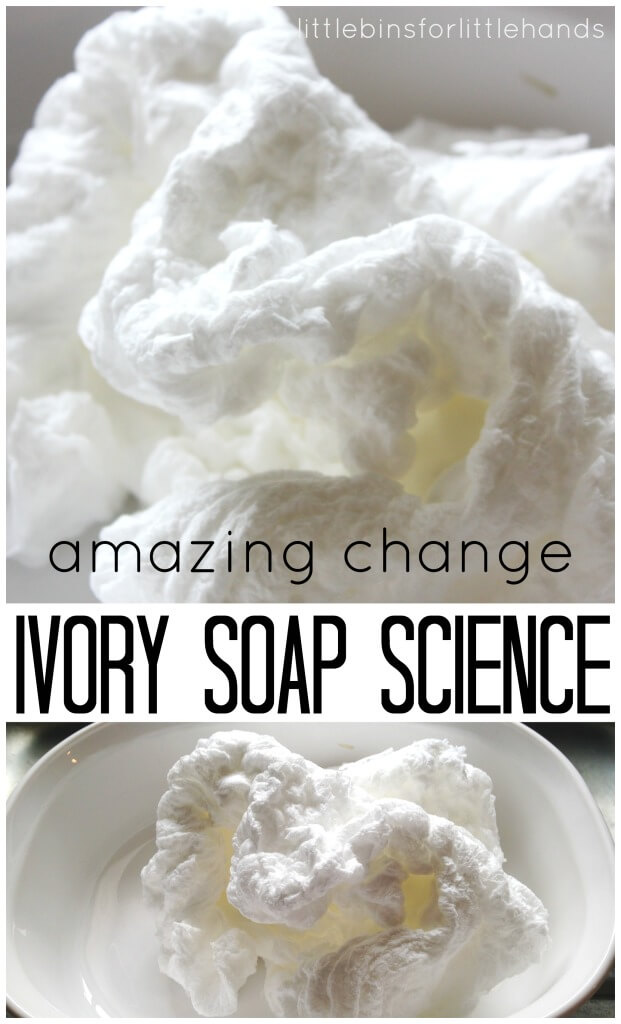 So now you have this awesome mass of Ivory soap that looks like a fluffy cloud {we made 2 bars}. What can you do with it? Make soap slime of course! I gave the boys {my son and his friends} colored water and eye droppers. They happily squirted colored water all over it. I decide to bring over a dishpan filled a 1/4-1/3 of the way with luke warm water. I provide whisks and potato mashers. We transferred the soggy soap clouds into the dishpan.

They whisked, mashed and stirred. The last time we made exploding ivory soap, we wanted to turn it into soap foam like we did before. I did not have nearly enough water in the bucket, so we ended up with a soapy slime instead. This feels fantastic, soft, and messy. The boys had there fill and were off to super hero adventures. I kept meaning to get rid of it, but I couldn’t help playing with it. I left it out overnight and it turned into an even more incredible slime in the morning. I added a few drops of food coloring to see what would happen. 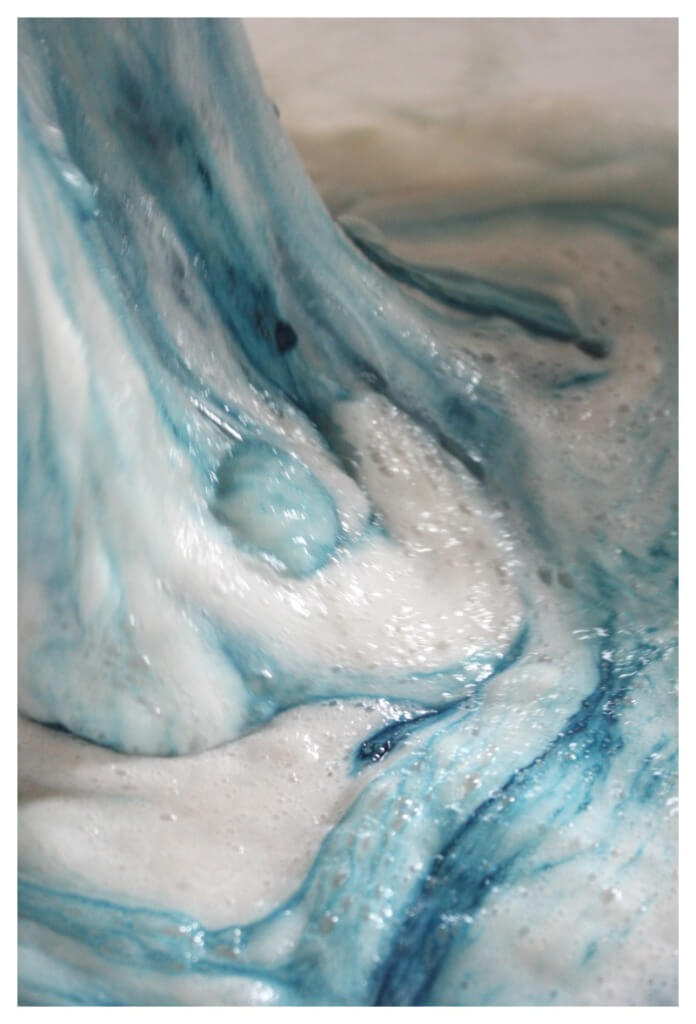 Note the blue food coloring did not stain our hands but be prepared for a potentially messy situations. This is much more of a liquid that our traditional slime recipe we always make. However, it had the stretch and flow similar to our slimes. 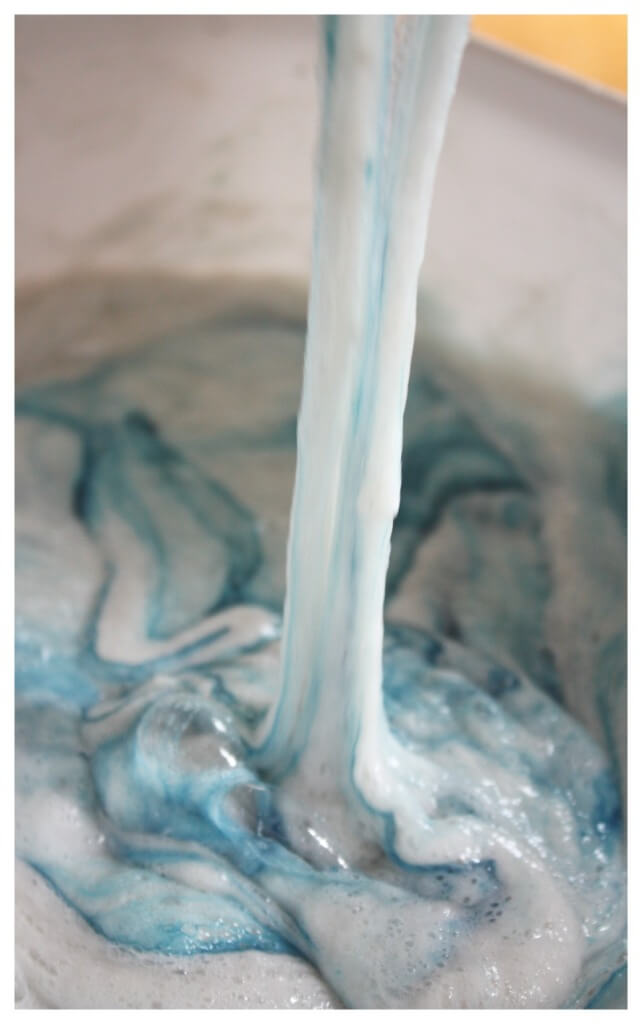 Note we added two bars of exploded ivory soap to very little water where as our soap foam was one bar of soap with much more water. The consistency and feel were very different. Both were rich in tactile sensory play! 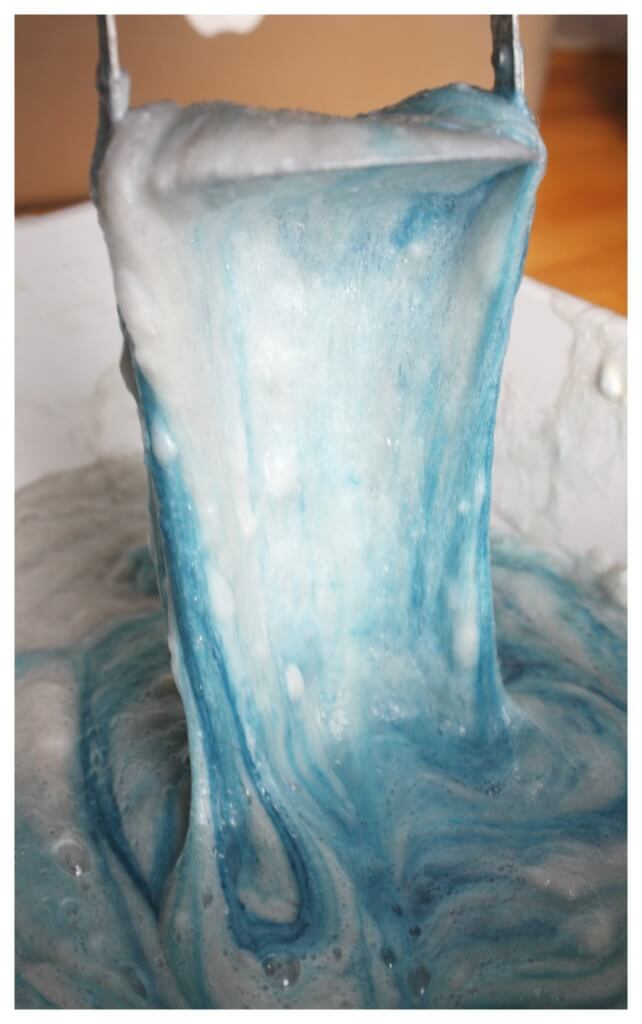 Awesome soap foam for those that like to get messy. My son preferred to use the kitchen tools I gave him to mix and pick up the soap slime while couldn’t wait to get my hands in it! You could scoop up the soap slime and then watch it pour out! 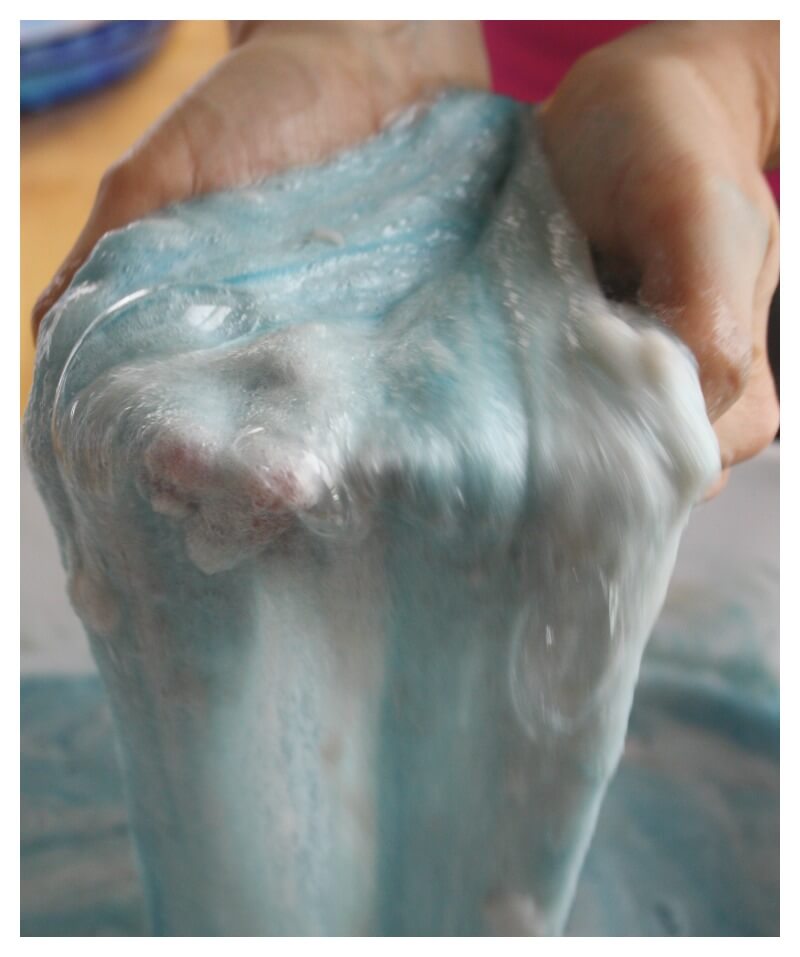 Soap slime is so simple to make for messy science exploration. If you have a child who would love to play with slime but doesn’t like messy hands, our liquid starch slime recipe is perfect. The science behind classic slime is neat too. We talked a little bit about viscosity and since we had a regular container of our slime out too, we could compare them. Soap slime is much less viscous {thick} than our traditional slime. 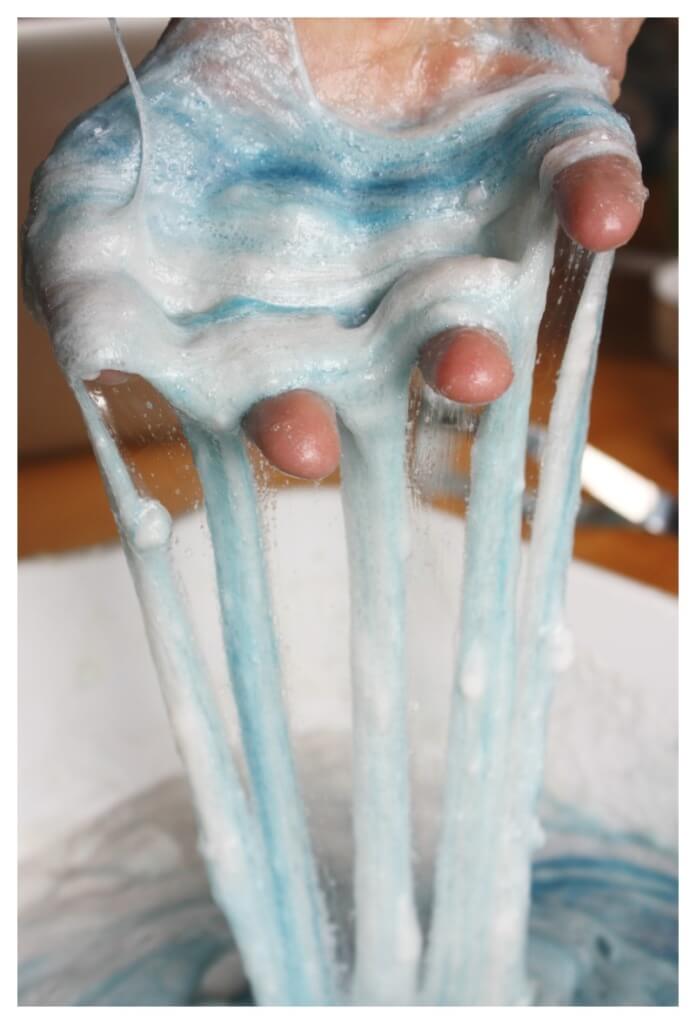 We have still the bucket of soap slime out and it is still awesome slimy sensory play. I love how you can pick up a whole handful or a single slimy strand. 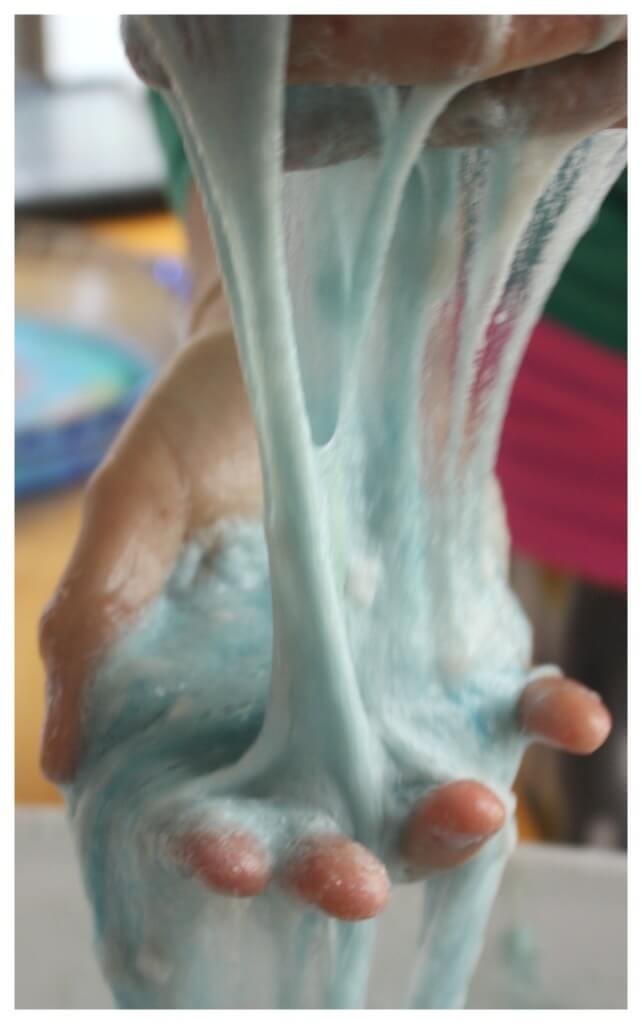 Since our soap slime is made from soap, we also had some great bubbles going on too! 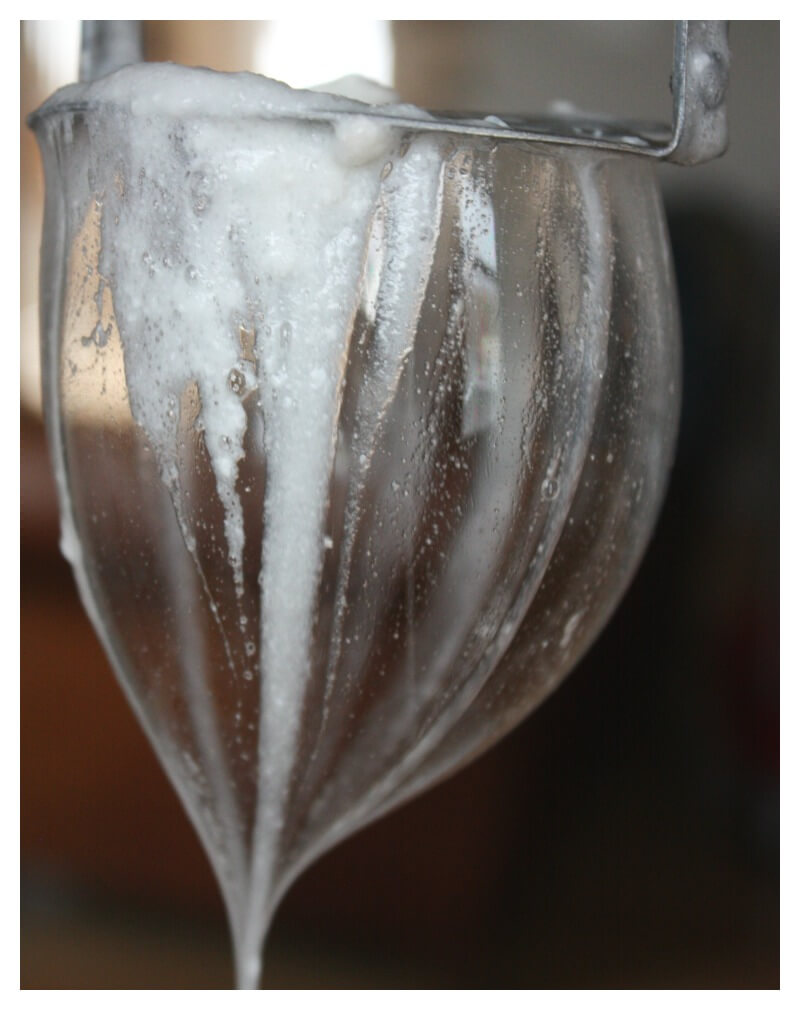 Grab some Ivory soap and try these two cool experiments! hands on science is great!

Make sure to check out he STEM blog hop for more great ideas each week.

Build Your Own Cafe | Money Math Practice from The Science Kiddo 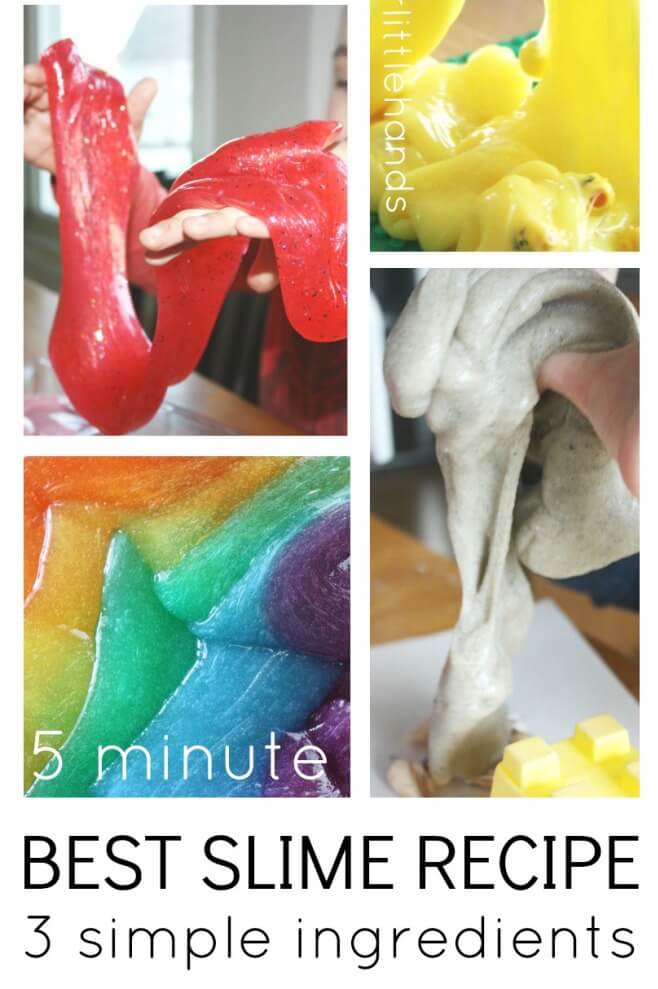 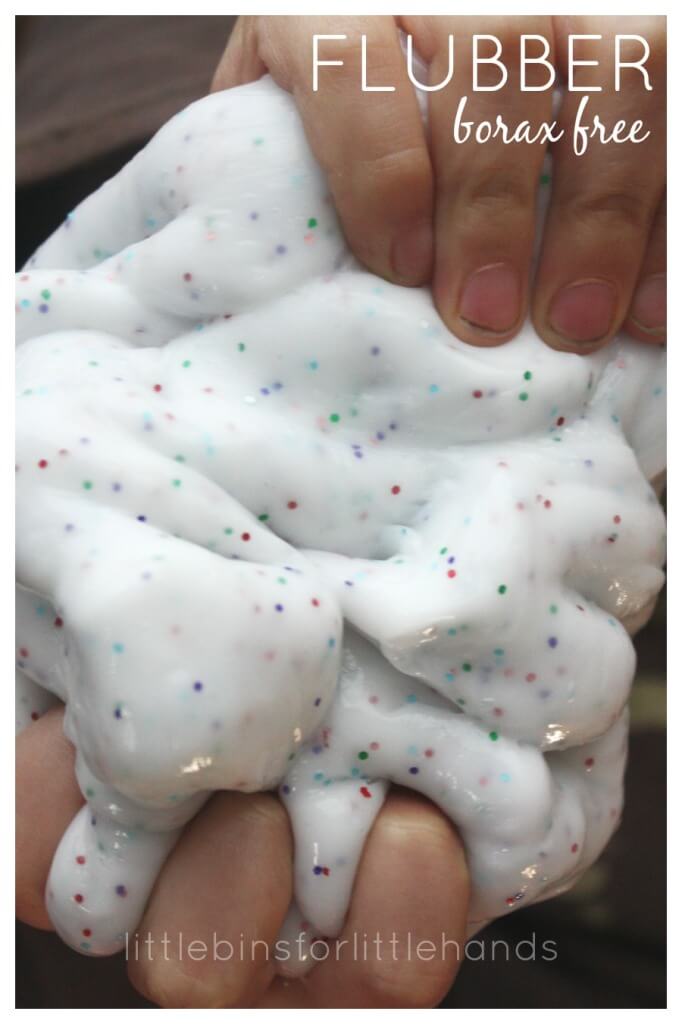 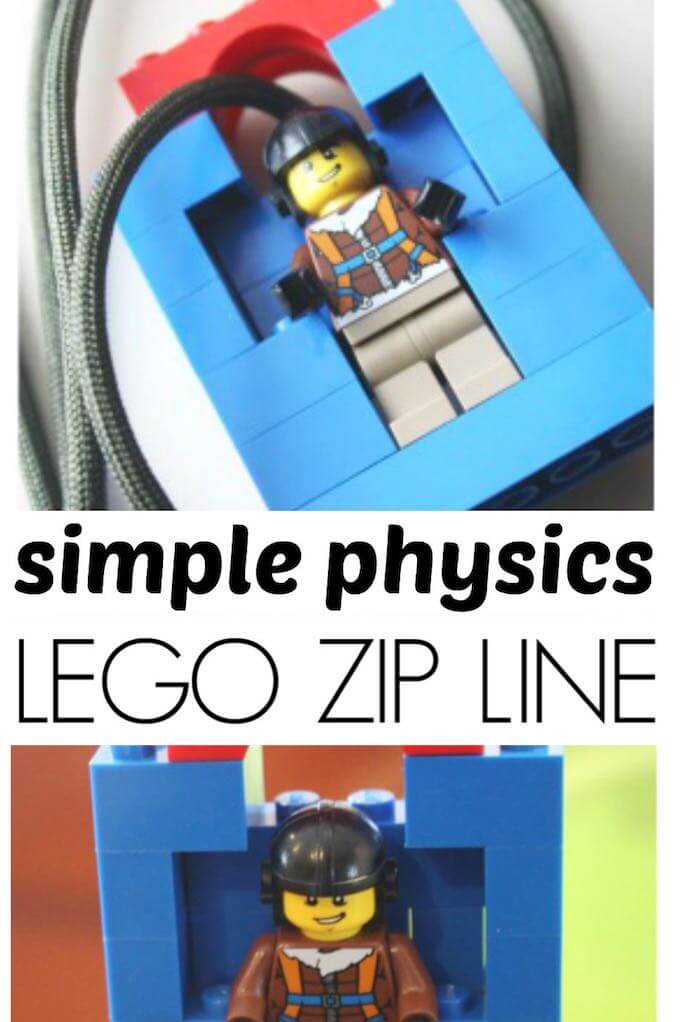 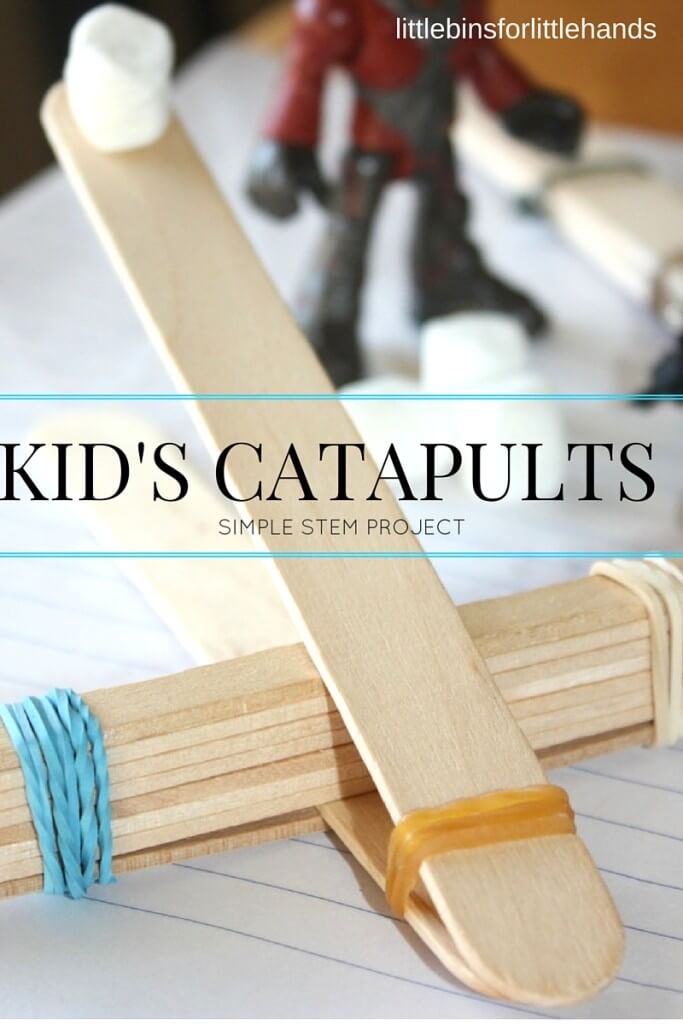 The One Thing Kids Need and It’s Not a Toy
Next Post: Stress Free Playdates Tips Advice Activities for Kids