Hands-On Play For Toddlers And Preschoolers 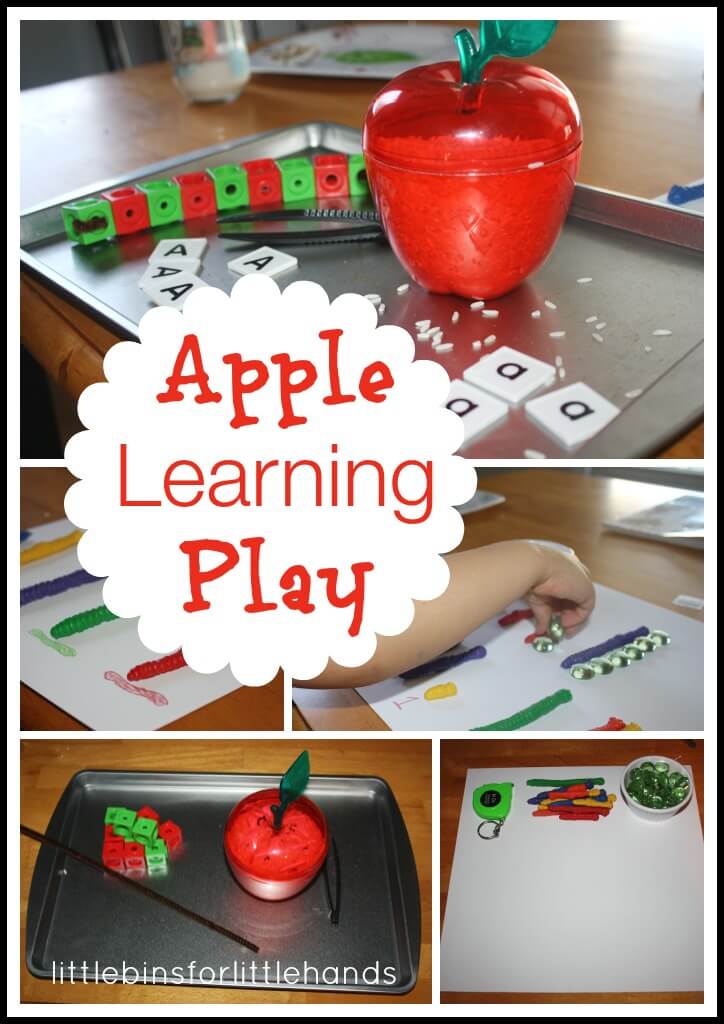 Over the past few weeks we have done a few very simple apple themed activities I thought I would put all together for you. We did not do them all at the same time. Liam’s attention span is getting considerably shorter instead of longer for his age, so I was trying to just put together some learning activities he could accomplish without too much struggle! I am hoping you will find one or two or maybe even all of them as inspiration for your own apple themed activities! 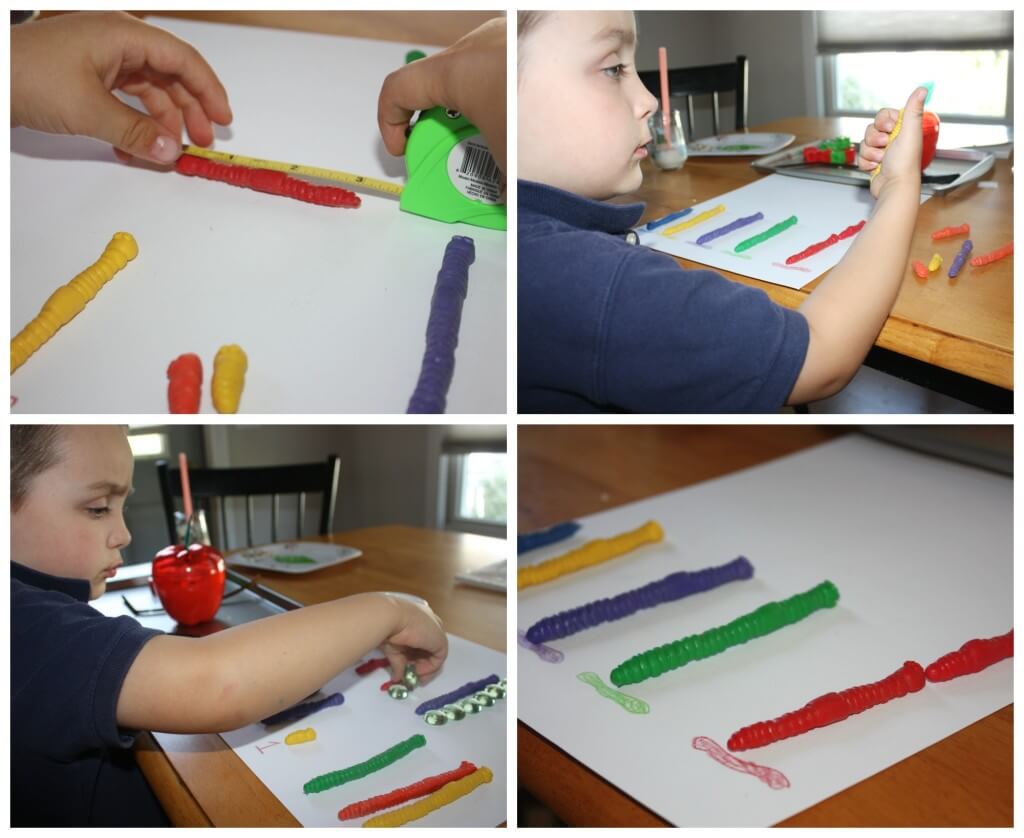 I had these cool worms from a counting set but pipe cleaners cut to different lengths would work just fine too! I had Liam work on putting them into order by size. He has difficulty with sizing lots of items so I let him do some trial and error with the placement. It is pretty self-correcting! We have a small measuring tape for him to use as well. He also measured each worm and grouped them according to their measurement. This was a nice activity to work on proper mechanics of a measuring tape! Next we chose a worm from each size and used glass gems to measure their length. Finally, we graphed the worms by color. This was our first introduction to graphing! I drew colored worms on the bottom of the paper and explained that we wanted to see which color had the most worms and which had the least. This activity was lots of hard work for Liam but he found it pretty interesting. 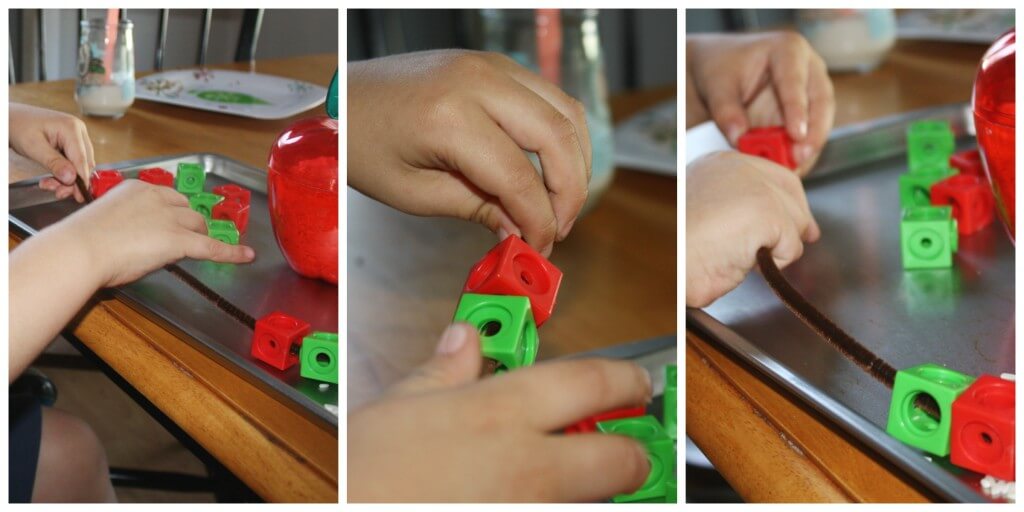 We used a pipe cleaner as a worm and red and green unifix cubes as apple pieces to work on  patterns as well as fine motor skills. I told him the worm was eating pieces of apple, so he Liam made munching sounds as he threaded the colors! Very cute but a couple of times he had to try again with the pattern because he was so fixed on the munching aspect! 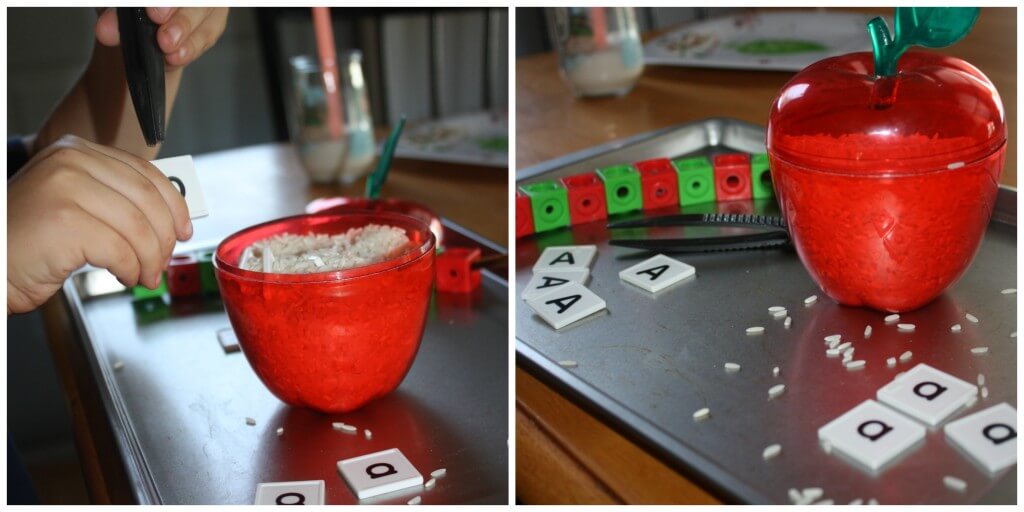 I have this awesome red plastic apple. A true find at a 2nd hand shop. I filled it with white rice and Aa letters. There were four each of the capital and lower case letters for him to sort with tweezers. He did this simply but it still took direction to put the letters right side up or to put in the right group. A quick activity but no open-ended play as I had hoped with the rice!

Sometimes, when all else feels like too much, we have to go back to basics! What do you do to change your plans if your child’s attention span is limited on a particular day? We keep it short and simple and always have a back up plan!