“Can you make an activity?” and “I would like an activity.” These are two phrases I heard the other night come from my almost 4 year-old son’s mouth. I was like OK! Game on, I needed an activity for the morning so after he went to bed I set out trying to come up with something quick and fun but was lacking in ideas. I know he is good at sorting but lacks in the fine motor department. He has been pretty uninterested in most things I have put together lately so I hadn’t really been planning anything. Nor did I have much time to execute a plan. Simpler the better right??

Before he went to bed I had put out a small sensory bin and a deviled egg tray (dollar store find). He was very excited by this even though it was empty. Once he went to bed, I tried different combinations of materials and objects before deciding on clear beads, gems, shells (2 different shapes), dolphin beads and this wonderful assortment of whales that I found at a local second-hand shop ($2.50). I used some green easter grass for seaweed and made it all into a sensory bin. I counted out 15 of everything. The idea was that each egg pod would be a mini ocean, each containing one of the items from the sensory bin! I pictured the whales swimming in the middle with the blue gems. 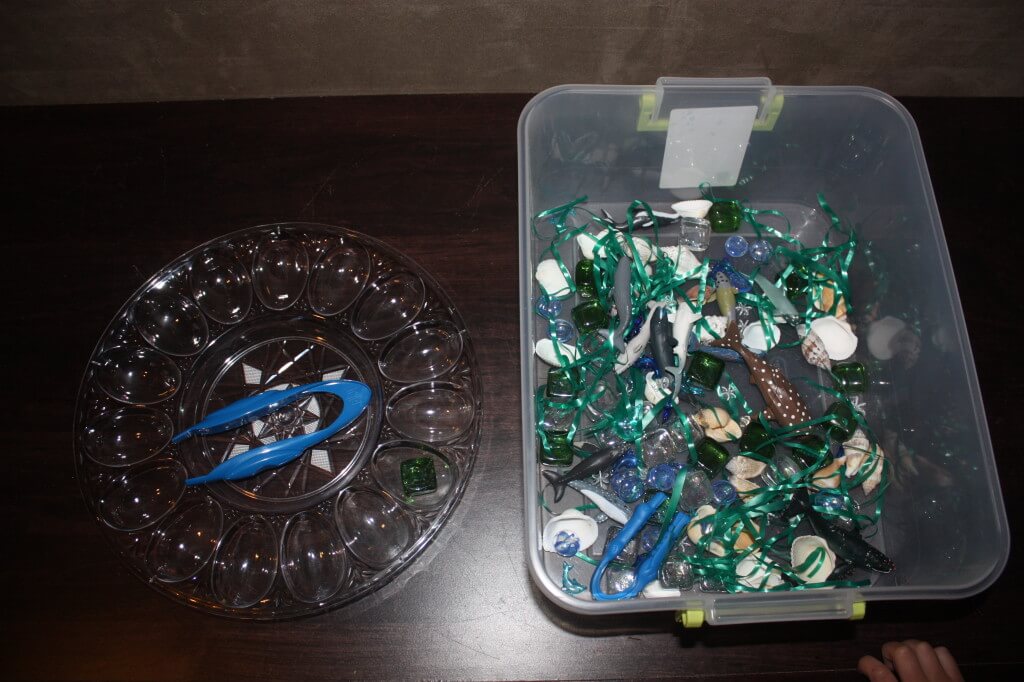 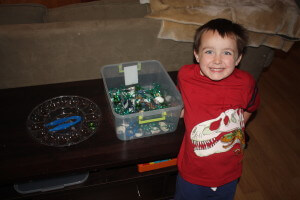 Pretty excited to see his activity and have his picture taken! 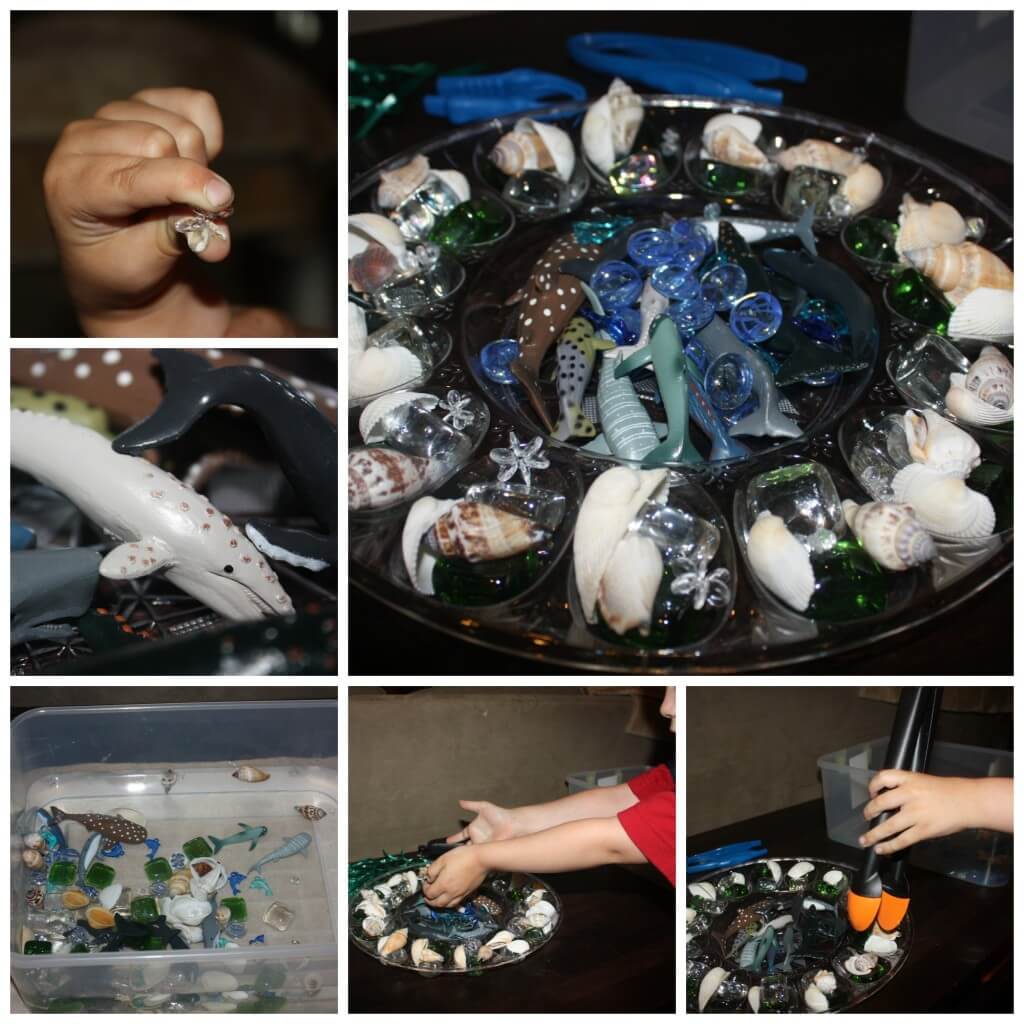 We used the tongs as much as possible but I didn’t want to frustrate him to much and make him want to be all done. He still needs me to sit with him and provide encouragement but we are hoping to build his independent play skills. He had some trouble understanding to put one in each pod and I half wished I let him just do it as he pleased but sometimes he ends an activity much to quickly that way and just dumps things. I switched to just telling him to find a particular thing and doing all of that one thing and then we would move on to he next item. He stuck with it and even enjoyed the whales and hearing what kind each was.

I had no idea this spontaneous activity would be so interesting to him in the end! We talked about the letter ‘W’ for whale and water. Who would have thought an alphabet adventure would pop up! Yay for teaching a happy alphabet which is my primary goal this summer! 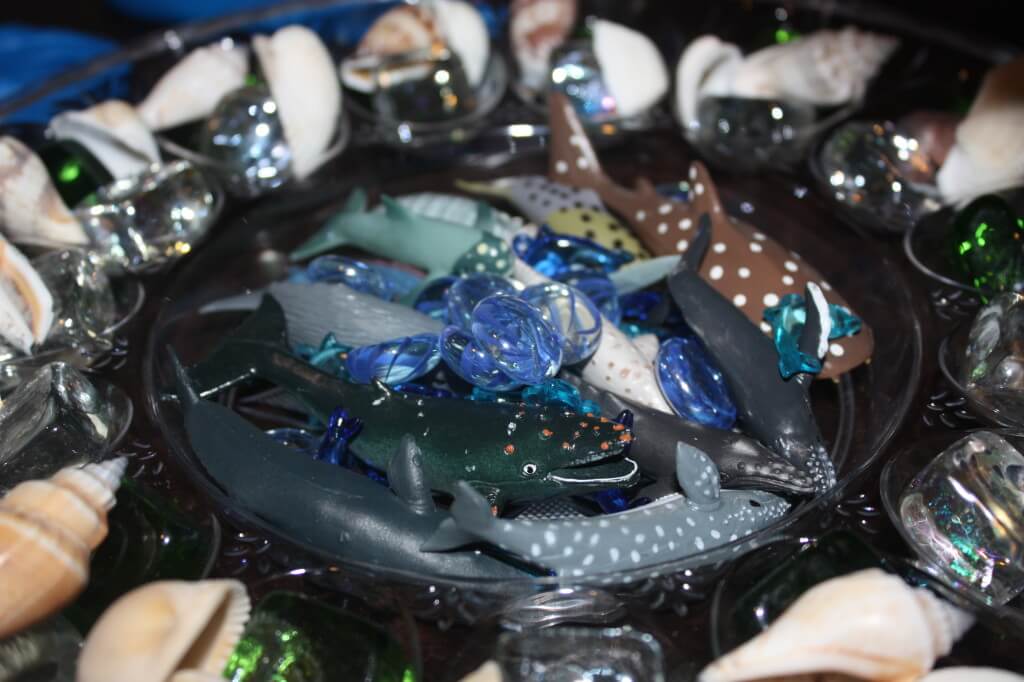 After we finished the initial activity, I asked him if he wanted me to fill the empty bin with water and put everything back in the ocean. Yes! He seemed to enjoy the process but once it was done, it was done. He didn’t really want to play in the water.

While he was filling the ocean back up, I found a whale book and began to read to him. It was a great story and he really enjoyed the Humpback whale and the adventure of the snail. Great moral to the story too. Thinking quick, I asked him if he wanted to paint an ocean for a humpback whale. Yes! Don’t often get many yes’ around here! 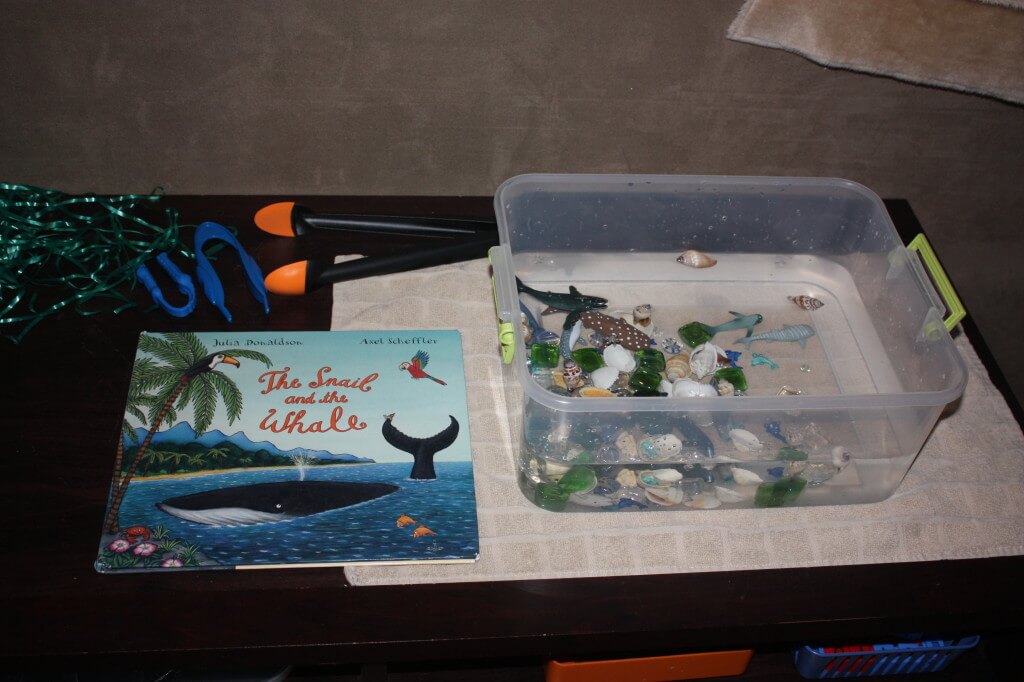 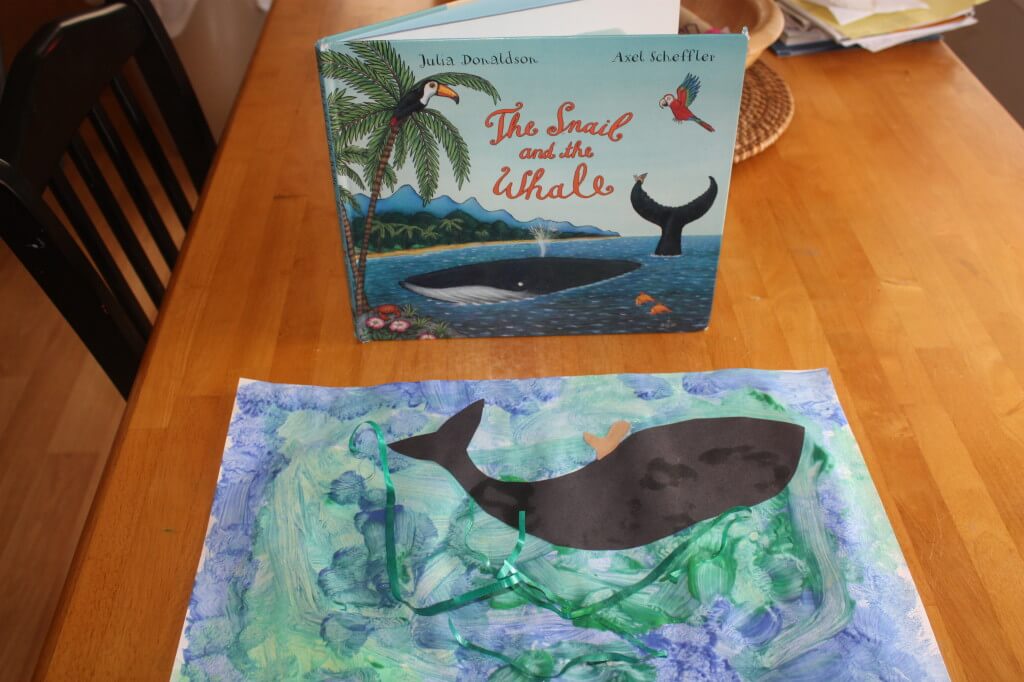 There’s the whale in his ocean with a bit of seaweed! We worked on painting all the white. Although excited to paint, his interest in really painting was minimal but we did it! I cut out a whale for him and then of course he asked for a snail.

Another morning of spontaneous activities that went quite well! Had I really planned it who knows what would have actually been done.

Check out my post onTeaching A Happy Alphabet here.