Celebrate Chinese New Year with a fun homemade dragon craft! Based on the mythical legend of Nian, build your own dragon with our free dragon printable below. Learn about holidays around the world and get the kids making this fun dragon craft at home or in the classroom.  Chinese New Year is a fun opportunity for crafts and activities for kids!

HOW TO MAKE A DRAGON 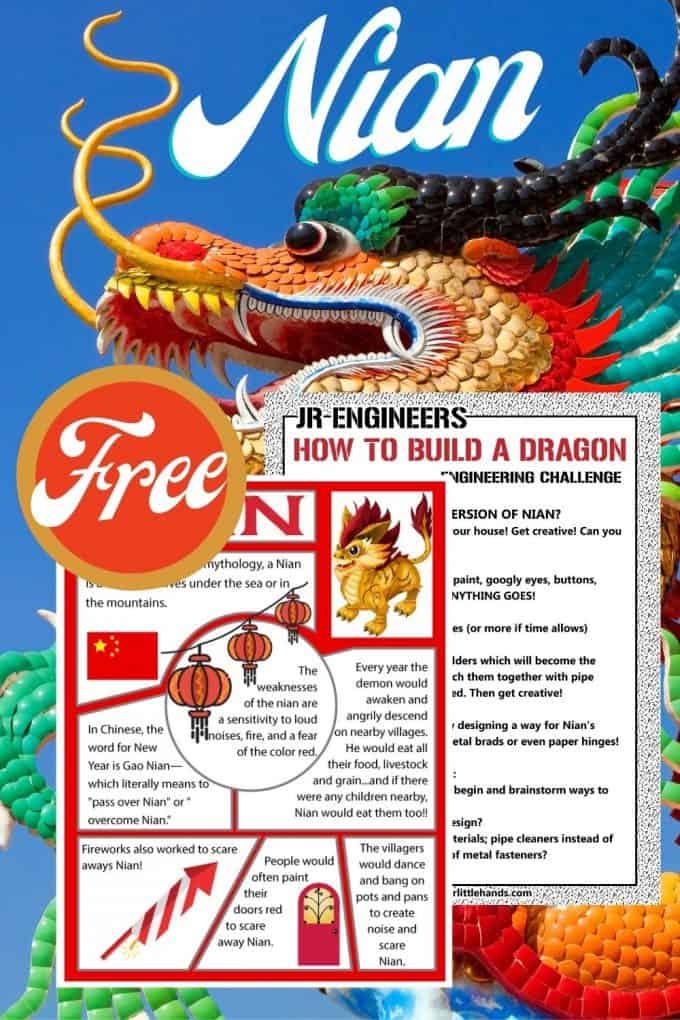 Chinese New Year, also called Lunar New Year, is not only celebrated in China, but also in many Asian countries and in the U.S. This year, Lunar New Year falls on February 12 and 2021 is the Year of the Ox. Expect fireworks, parades, lanterns and delicious food during this multi-day festival.

THE LEGEND OF NIAN

According to Chinese mythology, a Nian is a beast that lives under the sea or in the mountains. Every year the demon would awaken and angrily descend on nearby villages. He would eat all their food, livestock and grain…and if there were any children nearby, Nian would eat them too!!

In the Chinese languages, the word for New Year is Gao Nian— which literally means to “pass over Nian” or ” overcome Nian.” People would
often paint their doors red to scare away Nian or set off fireworks.

Build your own Nian dragon with this open ended dragon craft. Download our free dragon project below and let’s get started!

Can you build your own mythical Nian dragon? Use materials found around your house! Get creative! Can you make it move?

HOW TO MAKE A DRAGON

STEP 1. Cut out the individual egg holders which will become the segments of the dragon.

STEP 2. Attach them together with pipe cleaners or string to get started.

STEP 3. Then get creative!

Try designing a way for Nian’s head to move! You can use metal brads or even paper hinges! Draw your design before you begin and brainstorm ways to make it move.

How can you improve your design? Experiment with different materials; pipe cleaners instead of string? Paper hinges instead of metal fasteners?