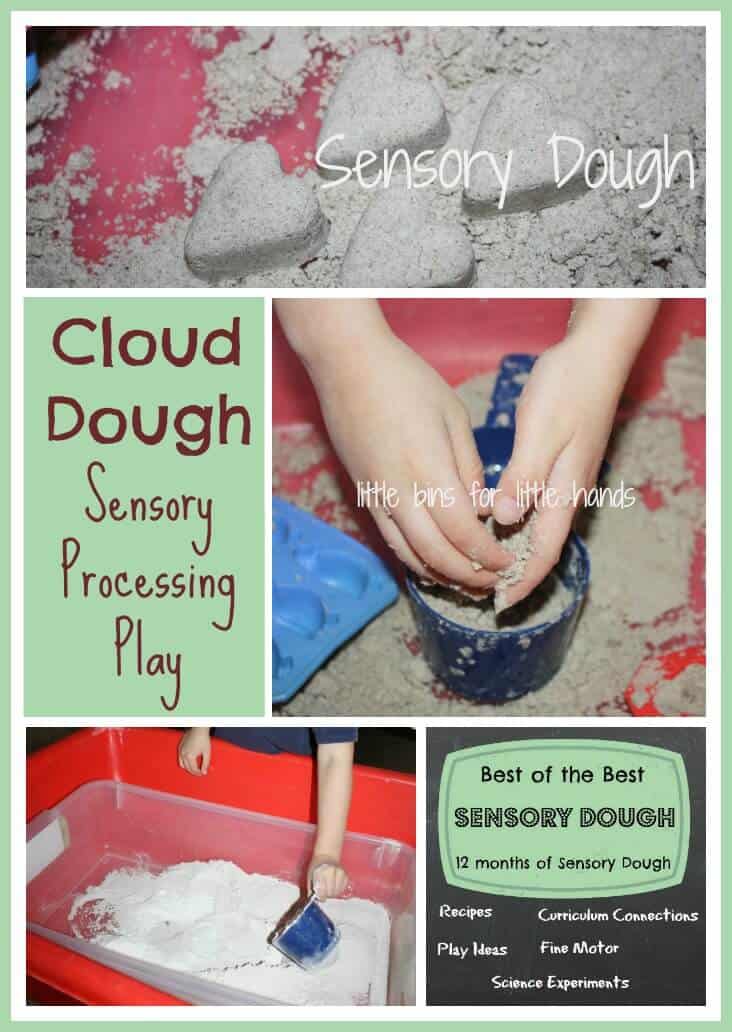 February is all about Cloud Dough!

I signed on to the 12 months of sensory dough play as a sort of therapy for my son who has a sensory processing disorder diagnosis. He can’t stand for his hands to be messy and often needs to wash them right away if something gets on his hands or spills on his hands. As you can imagine, mud, shaving cream, lotion, finger paint, slime, even bubbles that are too dry and the like are not that appealing to him! I love the idea of messy play experiences and want to introduce him to different types to broaden his experiences and become more comfortable with this type of play. This month we are mixing flour and oil for our sensory play! We have actually done it before, and it was better received than our attempt at foam dough. Check out our flour and oil pretend pie making sensory play!

As I mentioned, cloud dough sensory play is simply flour and oil. Traditionally people use baby oil but we have used cooking oil in the past. This time I used olive oil and buckwheat flour. I simply wanted to use up what we had extra of in the pantry. I have even used gluten free flour too! I  don’t remember where I read the recipe but it was about 5 cups of flour and a cup of oil to which I use a bit less. I decided to contain the mess in a bin within a bin! I also got out some cups, bowls, ice cream scoops and ice cube trays to see what he would want to use. 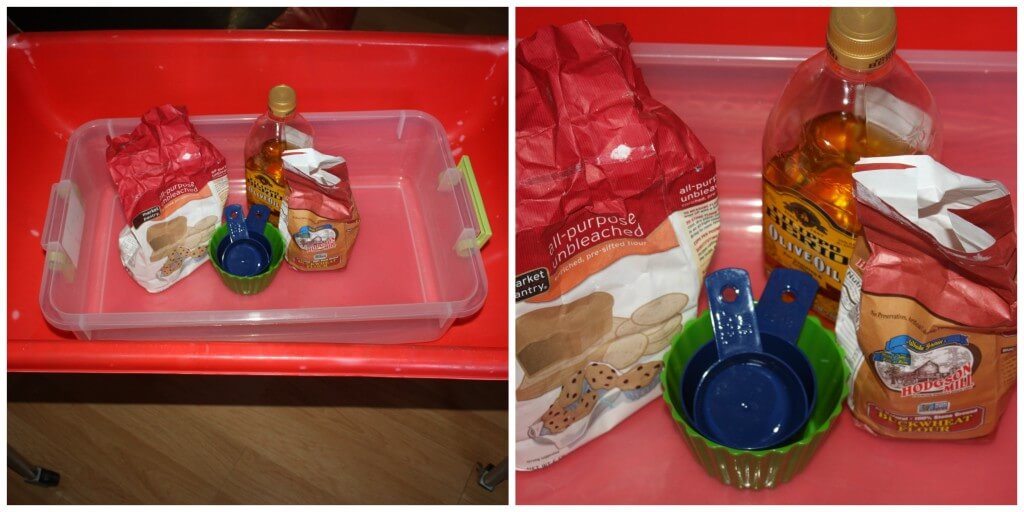 He helped to measure and pour the ingredients but did not want to mix it! I remember last month with foam dough that although he was willing to mix it, the messiness ended our play earlier than I had hoped. I dutifully mixed our flour and oil cloud dough! No pictures of this, sorry!

Now here’s where the cloud dough sensory play begins! He did engage in it far more than I thought, but it wasn’t very long before he needed to wash his hands. He did pack it around in the containers and do some dump and fill work with it. I molded some hearts in the ice cube tray. The one thing about these dough sensory play ideas, they are not camera friendly if my hands are in the mess too! 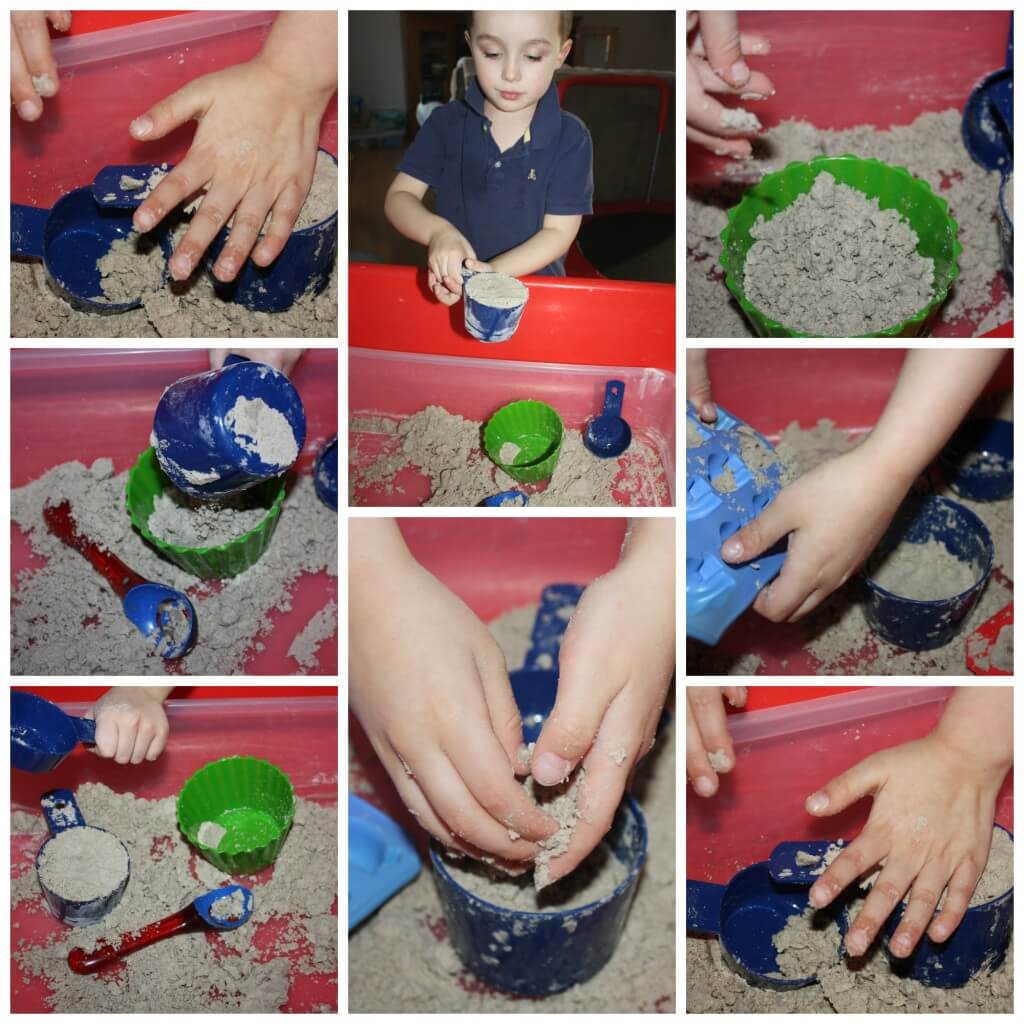 The actually sensory play piece of our experiment with cloud dough this month was much more positive since I didn’t have him mix it first. Since we had played with it before, I was curious to see if he would have the same reaction. It did not bother his hands as intensly as the foam dough, but he also did not engage with it for a very long time. I am not sure if it was the sensory play material or the fact that it was an open ended activity which he is not very good at staying with for a while. He is a much more structured kiddo. Hindsight, I should have considered trucks in the bin, but it is hard to think of everything. He would not naturally think to go get trucks unless I suggested next. Maybe that will be our idea for next month! 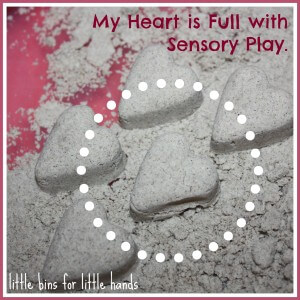 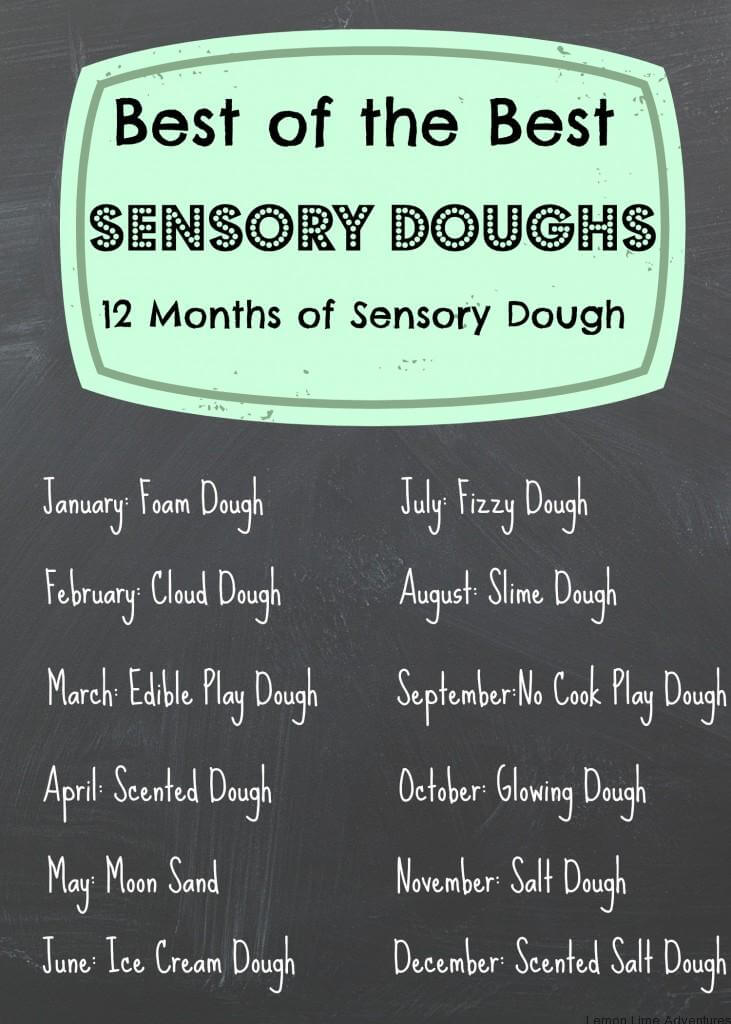 Read all about the 12 Months of Sensory Dough Play over at Lemon Lime Adventures and check out these other awesome blogs for more foam dough sensory play ideas!

What Is Hands On Play? {Hands On Play Party}
Next Post: Indoor Play Ideas for Another Snow Day