Have you ever made a true volcano science project before where you build the volcano from scratch? If not, let’s give it a try! It’s a great process for elementary-age kids to work on at home or in the classroom. Fun for scouting, groups and more, a homemade baking soda volcano is the perfect activity for a classic science experiment! Getting started with science is easy, getting them to stop once they’re hooked, not so easy!

HOW TO MAKE A VOLCANO WITH SALT DOUGH!

WHAT IS A VOLCANO?

The easiest definition of a volcano is a hole in the earth but we recognize it as a land form (usually a mountain) where molten rock or magma erupts through the surface of the earth.

There are two main shapes of volcanoes called composites and shields. Composite volcanoes have steep sides and look like cones where as a shield volcano has more gently sloping sides and is wider.

Volcanoes are classified as dormant, active, and extinct. The most active volcano today is in Mauna Loa, Hawaii.

Is it magma or lava?

HOW DOES A VOLCANO ERUPT?

Well, it’s not because of baking soda and vinegar! But it is due to escaping gasses and pressure. Baking soda and vinegar mimic the gas produced that pushes the liquid up and out of the container. This is similar to a real volcano where gas builds up underneath the earth’s surface and force the magma up through the hole in the volcano causing an eruption.

Some volcanoes erupt with an explosive spray of lava and ash whereas some like the active volcano in Hawaii, the lave simply flows out the opening. It all depends on the shape and the opening! The more confined space the more explosive the eruption.

Our sandbox volcano was a good example of an explosive volcano. Another similar example is our mentos and coke experiment.

Click below to get your quick and easy science process pack. 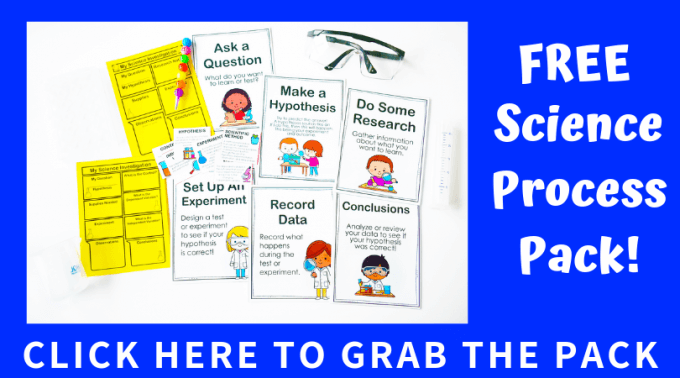 HOW TO MAKE A VOLCANO WITH BAKING SODA AND VINEGAR

Now that you know a little bit more about volcanoes, how about we make one! This baking soda volcano is made with our simple salt dough recipe. The extra time and effort it takes to make this volcano will be well worth it and a great project for kids of all ages.

HOW TO A MAKE A VOLCANO

STEP 1: First, you will want to whip up a batch of our salt dough. Find the easiest salt dough recipe right here. 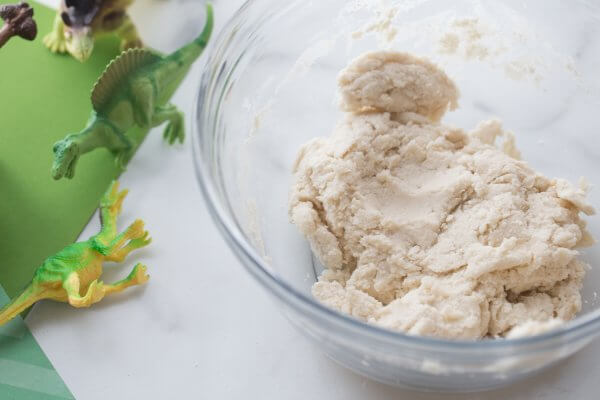 STEP 2: You want to form the salt dough around a small empty water bottle. Create a composite or shield volcano shape that you learned about from above.

Depending on the shape you want, the time to let it dry, and the bottle you have, you might want to make two batches of salt dough! Set your volcano aside to dry for at least 24 hours.

We made a composite shaped volcano!

TIP: Any leftover salt dough, you can make these earth-inspired ornaments! 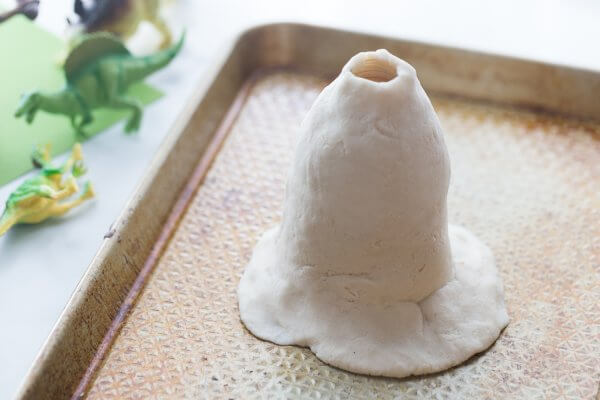 STEP 3: Once your volcano is dry, it’s time to paint it and add your creative touches to resemble the actual land form.

Why not conduct a safe internet search or look through books to get an idea of colors and textures for your volcano. Make it as authentic as possible. Of course, you can add dinos for a theme or not! 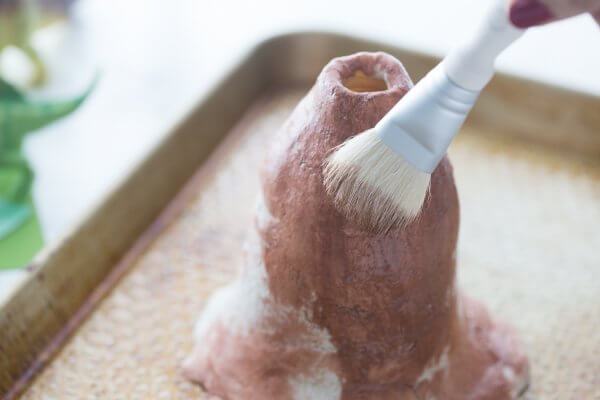 STEP 4: Once your volcano is ready to erupt, you need to prepare the eruption. To the opening, add a tablespoon or two of baking soda, food coloring, and a squirt of dish soap. 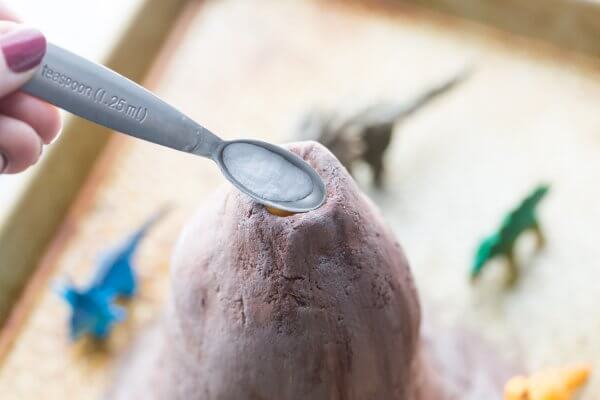 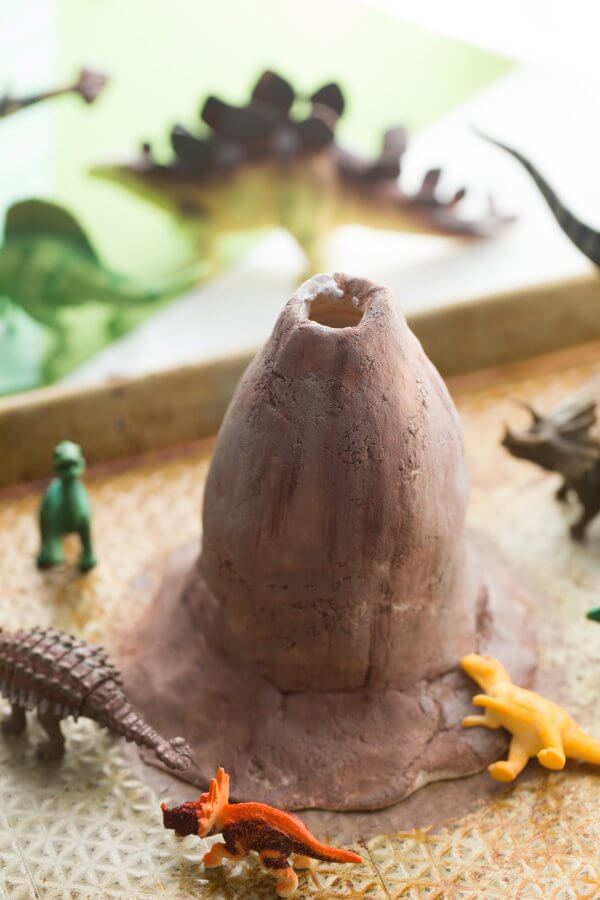 STEP 5: Time for the volcano to erupt! Make sure your volcano is on a tray to catch the lava flow. Pour the vinegar into the opening and watch. The kiddos are going to want to do this one over and over again! 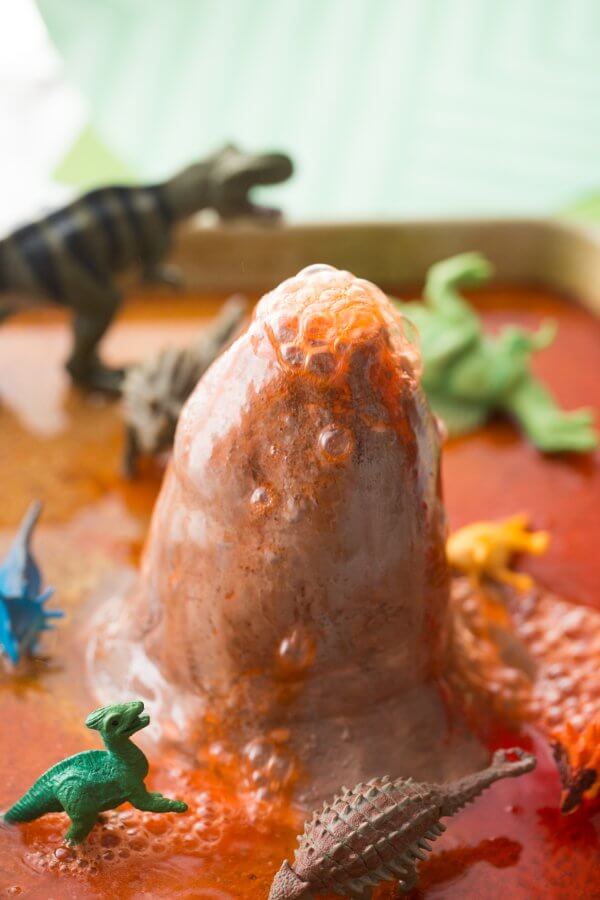 Chemistry is all about states of matter including liquids, solids, and gasses. A chemical reaction occurs between two or more substances that change and form a new substance. In this case, you have an acid (liquid: vinegar) and a base (solid: baking soda) when combined make a gas called carbon dioxide which produces the eruption you can see.

The carbon dioxide escapes the mixture in the form of bubbles. You can even hear them if you listen closely. The bubbles are heavier than air, so the carbon dioxide collects at the surface of the salt dough volcano or overflows depending on how much baking soda and vinegar you added.

For our erupting volcano, dish soap is added to collect the gas and form bubbles that give it a more robust volcano lava like flow down the side! That equals more fun! You don’t have to add dish soap but it’s worth it.

HOW TO MAKE A VOLCANO WITH BAKING SODA AND VINEGAR

Click on the image below or on the link for more easy science projects for kids.