Everyone wants to make slime these days and that’s because it’s just such a cool activity to try! Did you also know that making slime is awesome science too. If you want your kids to get more out of their slime making experience, try turning it into a science experiment and applying a little bit of science method too.   Read on to find out how you can set up science experiments with slime and have a cool science fair project for 4th graders, 5th graders and 6th graders. 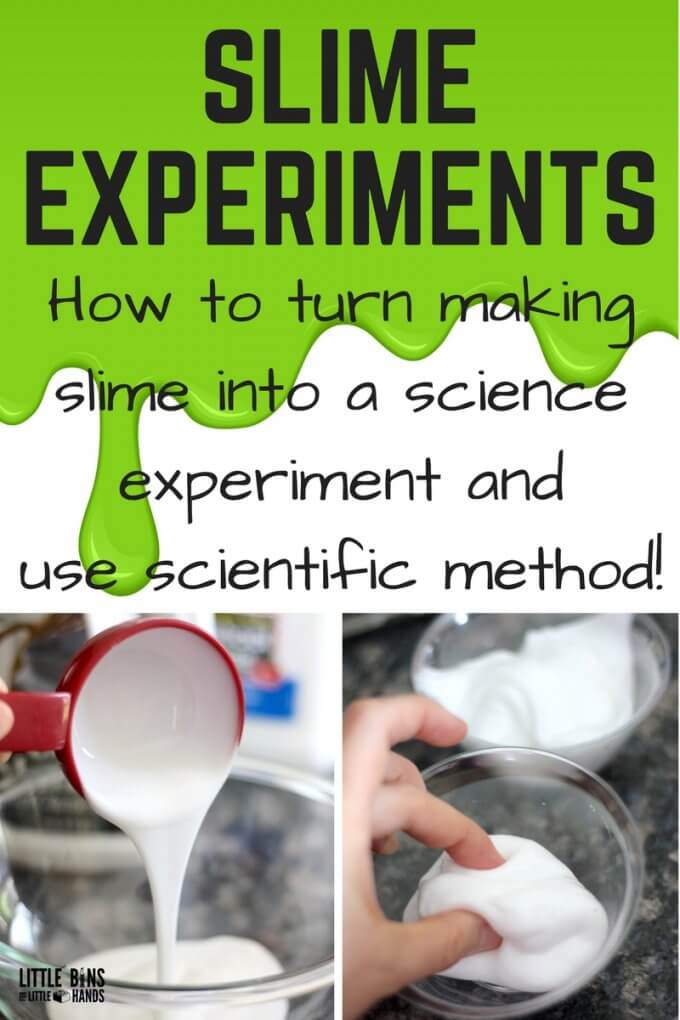 HOW TO MAKE SLIME

Homemade slime is a real treat for kids, and right now it’s a super popular activity that also happens to make a great science fair project. We have experimented with our slime recipes over and over again to bring you the best possible activities!

We also have a very cool fizzing slime recipe, watch the video and get the slime recipe here. Two chemistry demonstrations in one!

Slime activators (borax, sodium borate, and boric acid) change the position of these molecules in a process called cross-linking!

This is the reaction between the PVA glue and the borate ions in the slime activators. Instead of flowing freely, the molecules become tangled and create a slimy substance. Think wet, freshly cooked spaghetti versus leftover cooked spaghetti!

What’s slime science all about?  The borate ions in the slime activators (sodium borate, borax powder, or boric acid) mix with the PVA (polyvinyl acetate) glue and form this cool stretchy substance. This is called cross-linking!

The glue is a polymer and is made up of long, repeating, and identical strands or molecules. These molecules flow past one another keeping the glue in a liquid state. Until…

Remember the key to conducting a good science experiment is to only have one variable. For example, water could be a variable.  We eliminated the water from our recipe to see if slime needs water as an ingredient. We kept the rest of the recipe exactly the same! 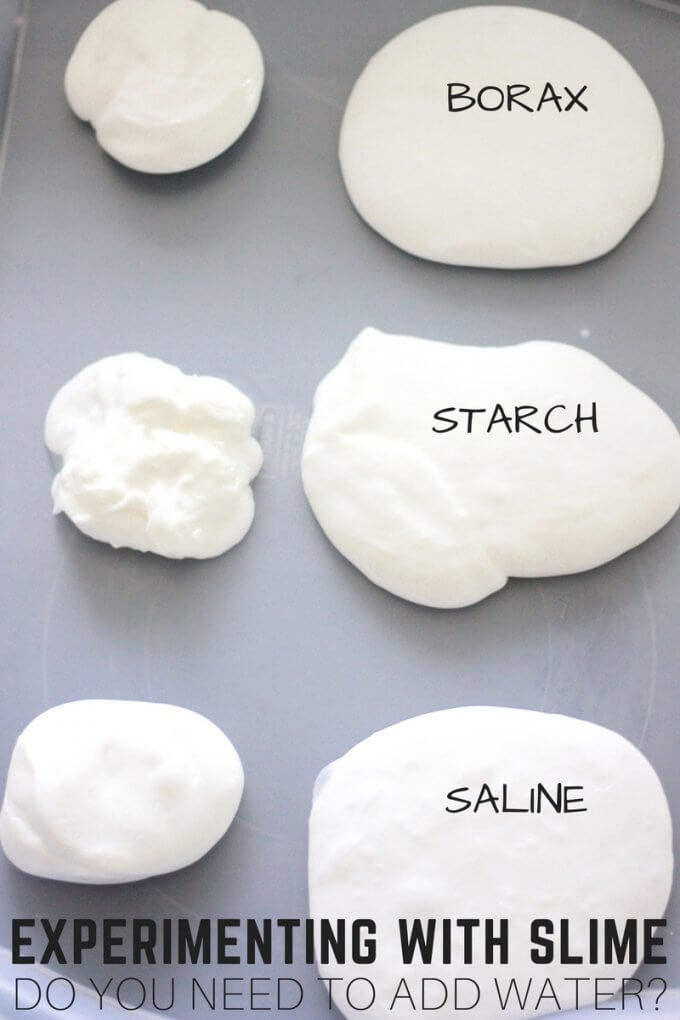 We put together a list of ideas for science experiments with slime. If you haven’t tried out the slime recipes already, I recommend that you learn how to make slime first!

You will find unique recipes for:

LOOKING FOR A SLIME SCIENCE PACK?

We now have one ready for you! It’s 45 pages of slime fun for kids! Click here. 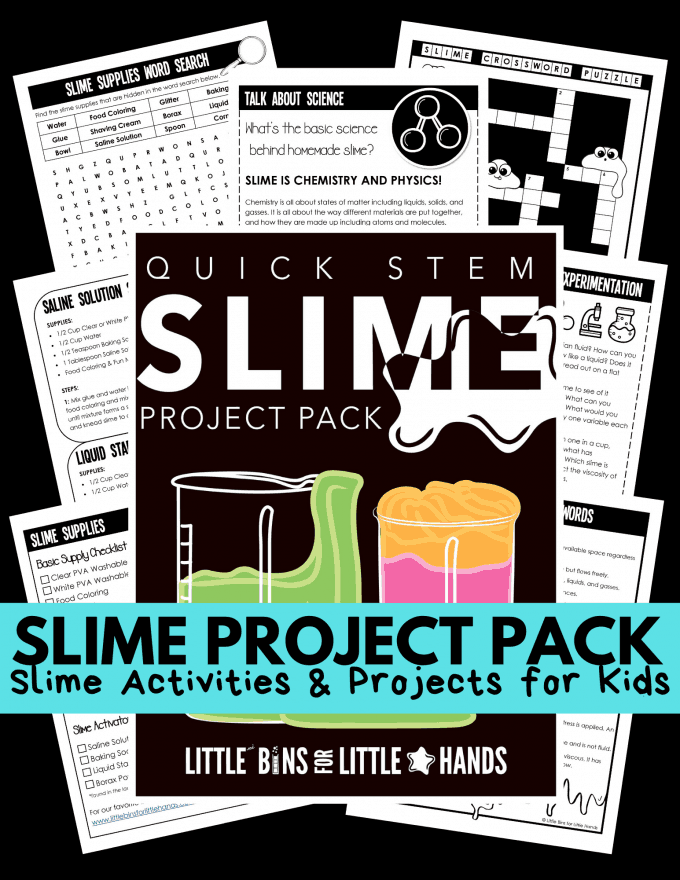 This was a super fun experiment we tried out and the results were pretty cool!  We tested and compared three different slime recipes, but you could do it with just one type of slime and see what happens.   Hint… Liquid starch slime without water is no fun!  Try this borax slime recipe or saline solution slime instead if you are just going to pick one recipe. 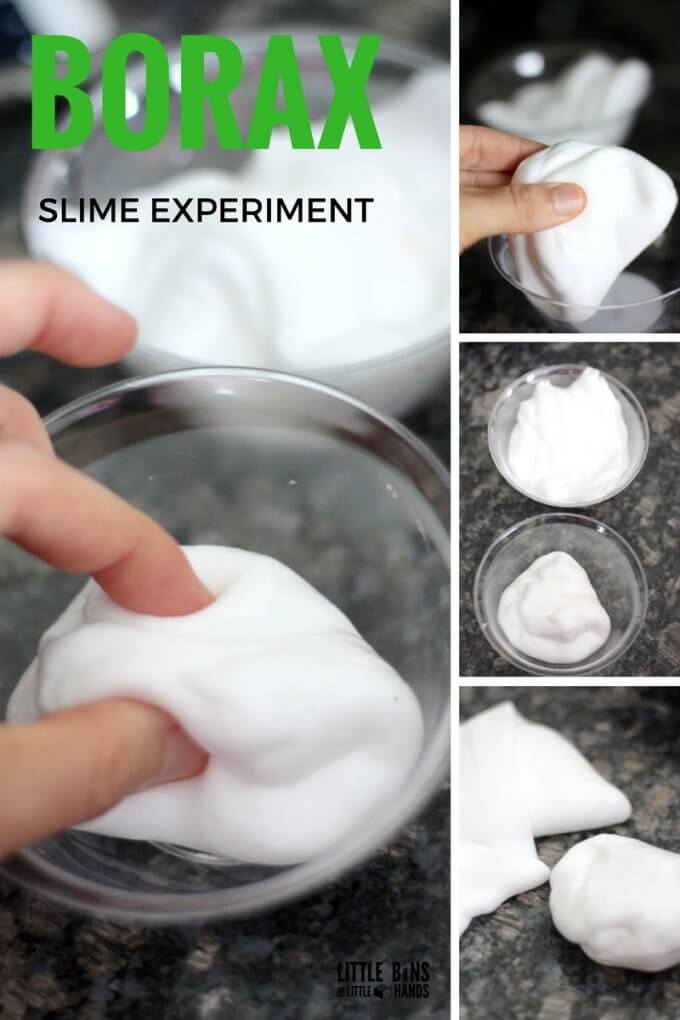 2.  ARE ALL BRANDS OF WASHABLE GLUE THE SAME?

This is a great opportunity to test the classic Elmer’s Washable School Glue alongside Dollar Store/Staples brand glue or Crayola Glue!

The key to this slime science project is to decide how you will compare the different batches of slime made from each brand of glue.  Of course, keep your recipe and method for making your slime the same each time.  Think about what makes a good slime… stretch and viscosity or flow and decide how you will measure those characteristics for each slime.  Your observations of the “feel” of each slime are valid data as well.

3.  WHAT HAPPENS IF YOU CHANGE THE AMOUNT OF GLUE IN THE RECIPE? 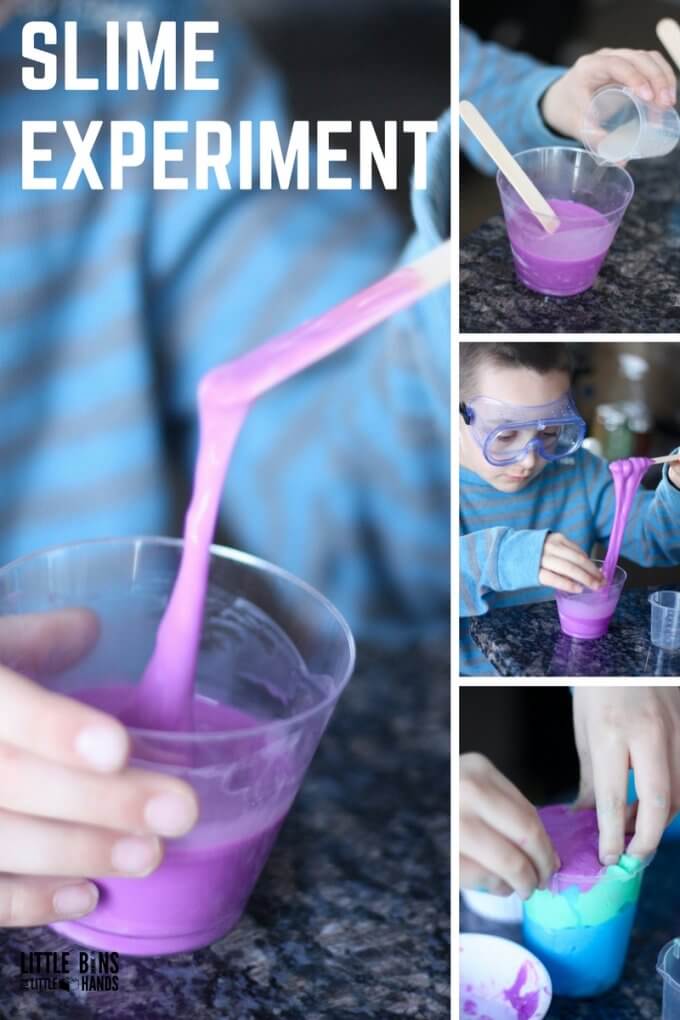 4.  WHAT HAPPENS IF YOU CHANGE THE AMOUNT OF BAKING SODA?

What’s the best ratio of powder to water for a borax free fiber slime?  Use our taste safe fiber slime recipe to test your favorite consistency for gooey slime. We went through several batches to see what worked the best.  Make sure to decide ahead of time how you will measure the slime consistency for each batch. 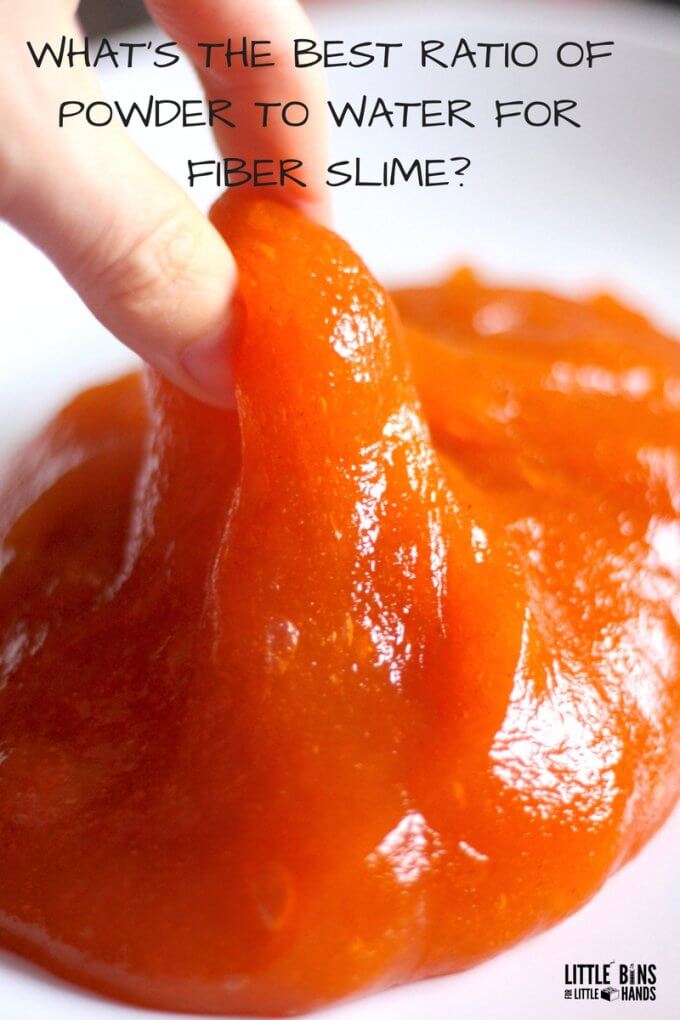 6.  WHAT AMOUNT OF FOAM BEADS MAKES THE BEST FLOAM?

What else can you test when it comes to your next slime project?

Which glue makes the better slime? Use the same recipe for both and compare/contrast the similarities/differences. Does one recipe work better for either clear or white glue?

DOES COLOR AFFECT THE CONSISTENCY OF SLIME?

Do different colors have an effect on the consistency of the slime. You can use the standard box of colors, red, blue, yellow, and green to see! Make sure to use all the colors with one batch of slime!

WHAT HAPPENS IF YOU FREEZE SLIME?

Is slime affected by temperature? What happens if you freeze your slime?

OR COME UP WITH YOUR OWN SLIME SCIENCE EXPERIMENT!

Try out your own slime science experiment. However, we do not recommend substituting slime activators without knowing what the chemical reaction will be first.