If  you want to make slime easy then you need the BEST SLIME RECIPES to do it! We know how to make the best slime around here, and we know kids want to make slime that stretches, oozes, crunches, glows, and even makes those funny farting sounds. I know, my son is a big fan of that right now! Do you know that homemade slime is really easy to make, plus it’s a super cool science lesson for kids! 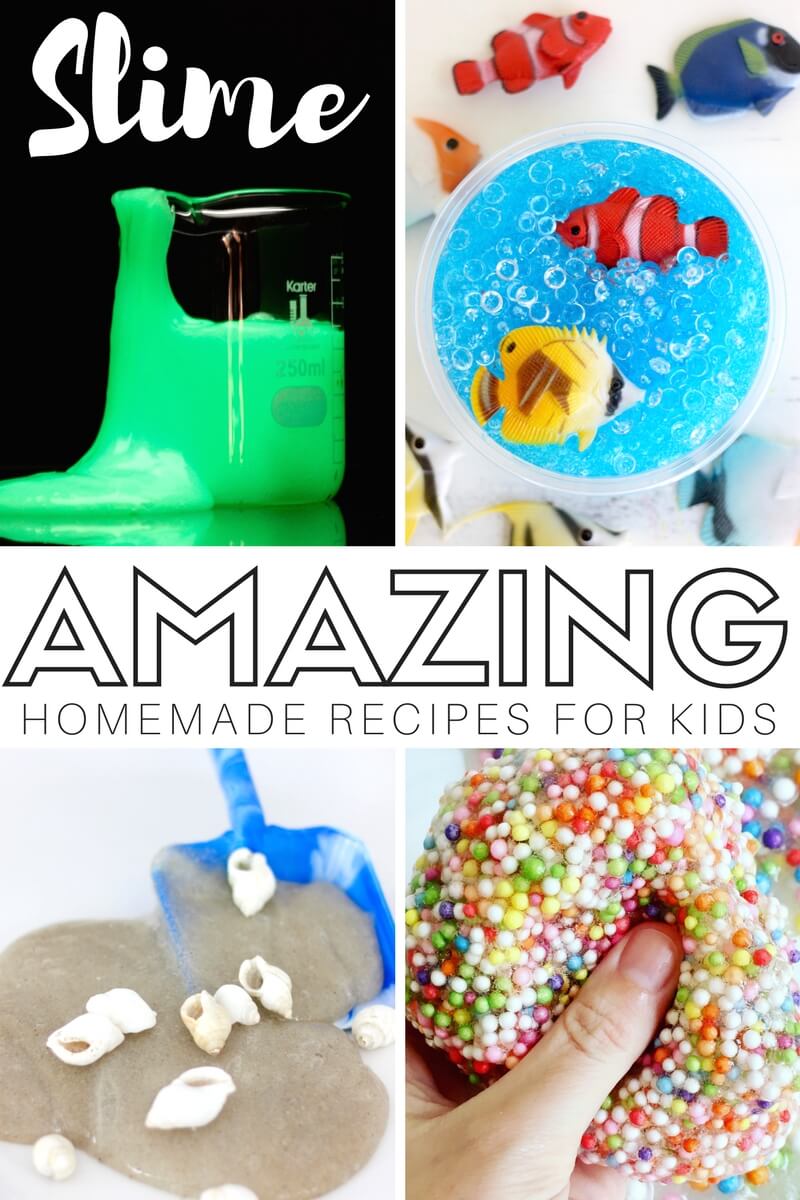 HOW TO MAKE SLIME

Want to know how to make slime that is incredible stretchy? Or do you want to know what’s wrong with your slime when all it does is stick to the spoon or stays a liquid no matter what you add to it?

Then you need… our best slime recipes!

We have slime recipes for everyone, where ever you are in the world. I know that some territories and countries cannot get certain slime ingredients, so we have tried to put together an awesome list of slime ideas for everyone!

Plus, we are always working on more cool slime recipes to share with you. We love testing out new slime ideas, creating new themes, and making sure our best slime recipes really are the best!

HOMEMADE SLIME IS SCIENCE TOO!

We always like to include a bit of homemade slime science around here. Slime really does make for an excellent chemistry demonstration and kids love it too! Mixtures, substances, polymers, cross linking, states of matter, elasticity, and viscosity are just a few of the science concepts that can be explored with our slime recipes.

What’s the science behind the slime? The borate ions in the slime activators  (sodium borate, borax powder, or boric acid) mix with the PVA (polyvinyl-acetate) glue and forms this cool stretchy substance. This is called cross linking!

When you add the borate ions to the mixture, it starts to connect these long strands together. They begin to tangle and mix until the substance is less like the liquid you started with and thicker and rubberier like slime!

Picture the difference between wet spaghetti and leftover spaghetti the next day. As the slime forms the tangled molecule strands are much like the clump of spaghetti!

Make sure to check out the end of this page for more helpful information on slime supplies, slime troubleshooting, and more slimy resources!

Click on the blue links below to learn how to make each type of slime! Each of the following slime recipes has full picture and written instructions, and even an helpful slime video!

Smooth as butter, our clay or butter slime is sure to be a popular slime recipe with the kids! 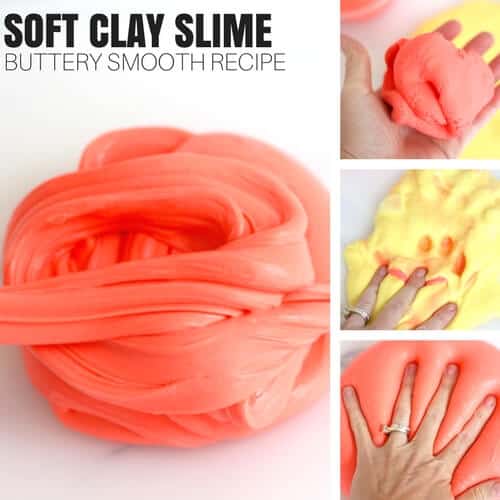 Our crystal clear slime recipe is the best way to showcase your favorite confetti for any holiday or season! 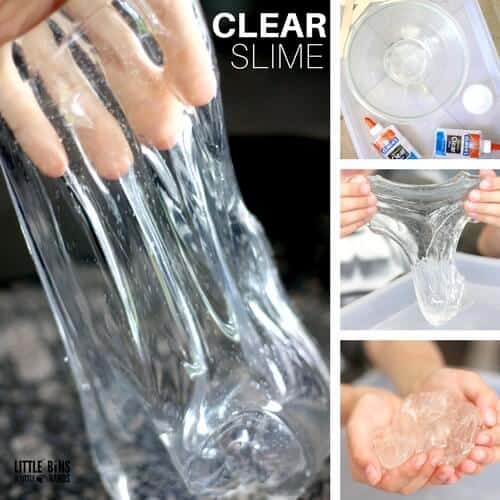 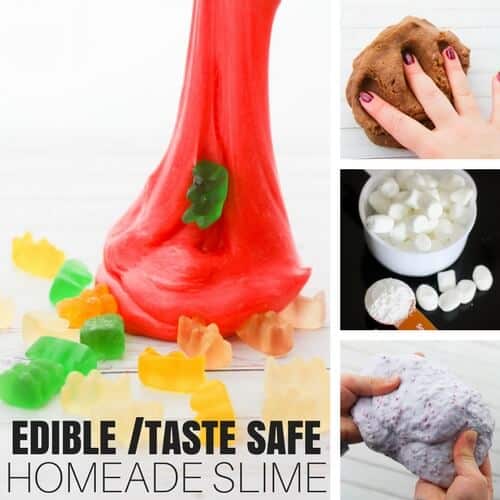 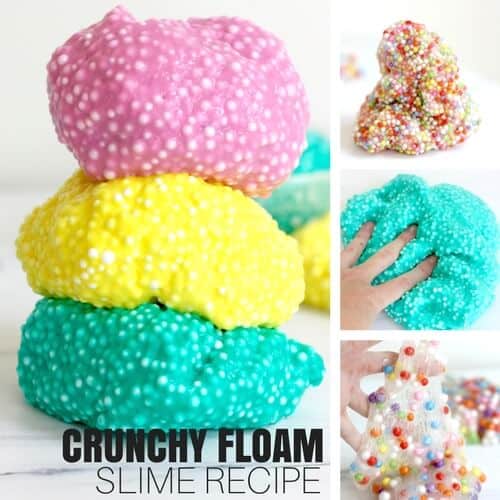 Our fluffy slime recipe is easy to make and a must try slime for kids. 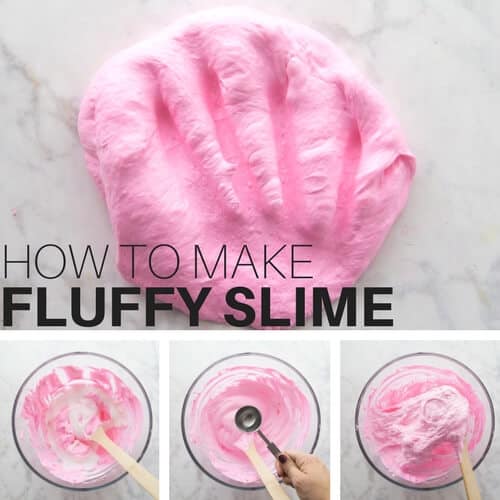 Inspired by everyone’s favorite movie, Frozen 2, this gorgeous sparkling slime hits the nail on the head for a must try slime making activity. The world of Anna and Elsa is magical and well, we think slime is too! 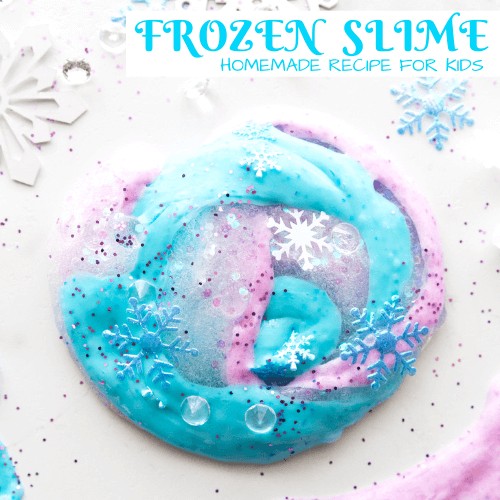 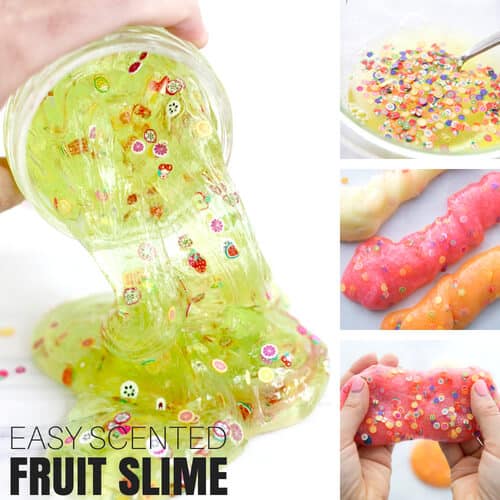 Glitter, either you hate it or love it! We LOVE glitter and we love sharing our favorite sparkly glitter slime recipe with you! 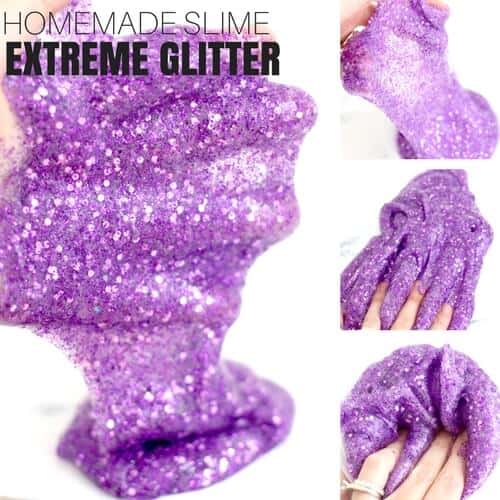 GLOW IN THE DARK SLIME

No black light needed for this super simple slime recipe that’s so COOL to try with kids. 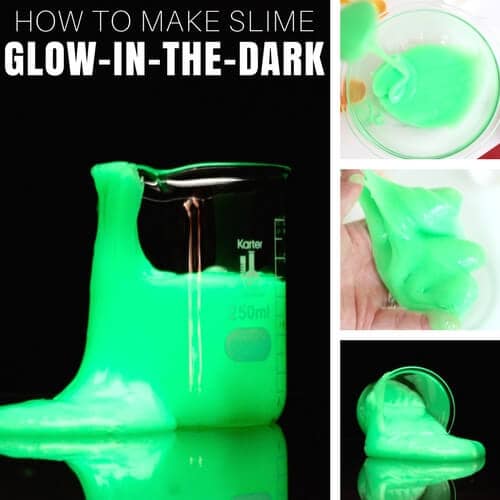 A simple, basic slime recipe which is also great for classroom use with a large group. 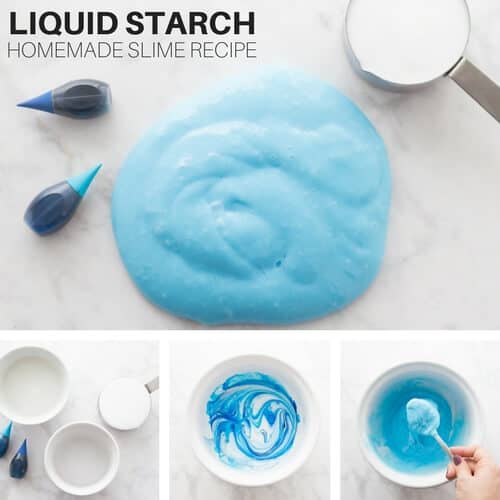 Our most popular slime recipe yet! Easy to make, stretchy, and safe for kids of all ages. 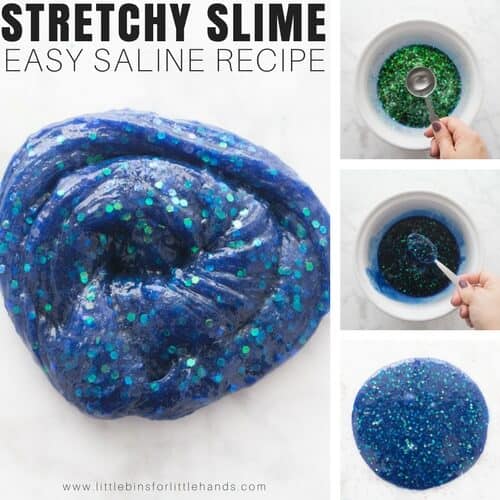 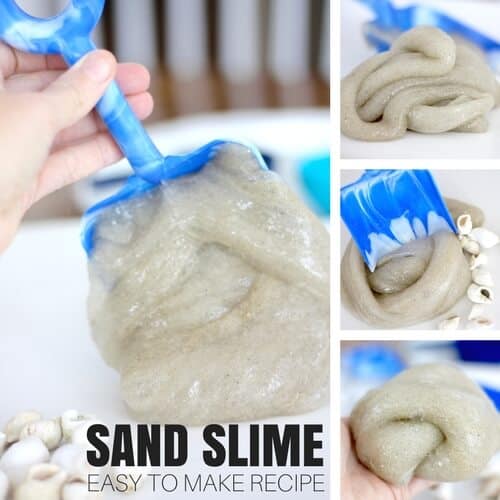 There’s more than one way to play with snow this season, and its called homemade snow slime!  We have 7 different slime recipes to share that will have you building your own snowman in no time! 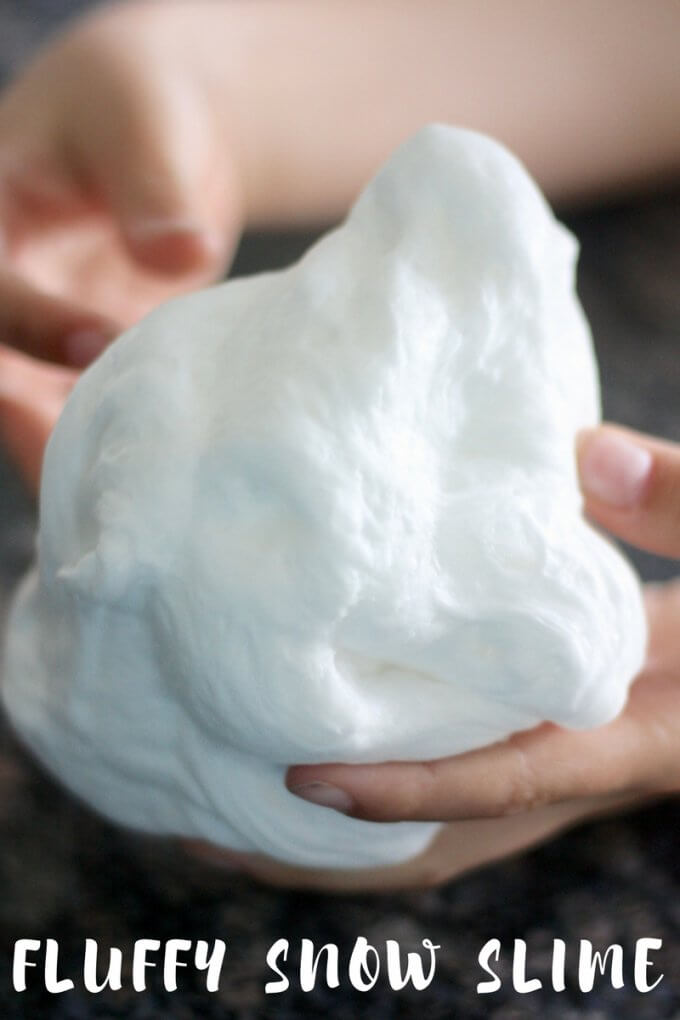 This DIY slime does not use borax powder or liquid starch, and it still has an awesome stretch to it! 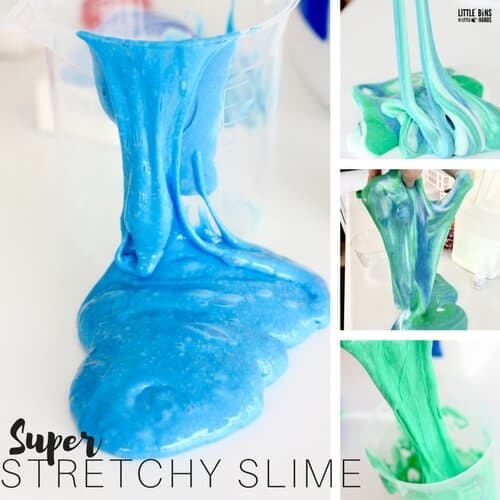 HOW DO YOU MAKE SLIME?

I use to think slime was hard to make, until I tried it! Like me, you see all the awesome slime videos and you think you will never get your homemade slime recipe to come out right.

That’s why our best slime recipes are now my favorite! Make sure to buy the glue by the gallon, for lots of slime making fun!

We also love to give out slime for party favors or just because. Nothing will amuse a kid for a while like playing with slime!

One of our favorite things is to come up with different types of slime, for our favorite holidays and seasons, and even for some of our favorite characters. Slime is one of the activities we love to play with for each new holiday, and you will find tons of cool slime recipes no matter what month it is! 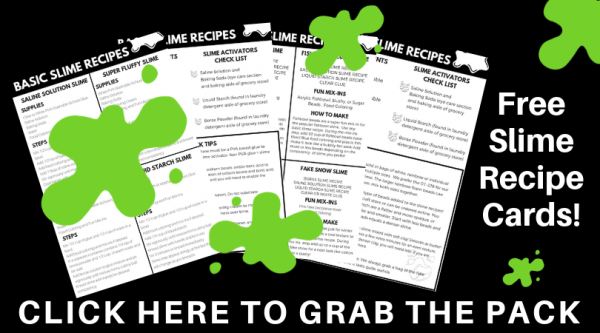 I hope we have given you enough options to get you on your way to making awesome slime in no time. It’s true, sometimes your slime will be too sticky or too hard. It’s happened to all of us!

Read through the resources below to prepare you for your kids slime OBSESSION! We have all the resources you need to get started making AWESOME slime from the start.

HOW TO FIX STICKY SLIME

HOW TO GET SLIME OUT OF CLOTHES

THE AMAZING BENEFITS THAT COME OUT OF SLIME MAKING WITH KIDS

HOW TO MAKE SLIME WITH THE BEST SLIME RECIPES!

Click on the image below or on the link for more awesome homemade slime recipes. 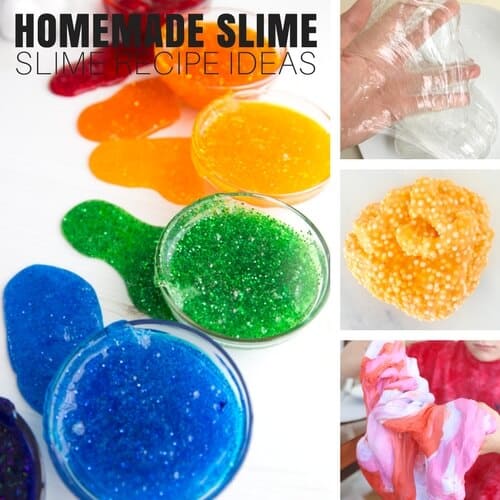