When we think of Thanksgiving and recipes, I’m pretty sure you aren’t thinking about Thanksgiving slime recipes! Well that’s our job around here, to think of cool new seasonal slime recipes for you to try with the kids! This is the first year we have decided to try out a few turkey themed ideas before the Christmas rush sets in. What do you know, we had a blast coming up with these ideas. Homemade slime really can be for any time of the year.

SLIME MAKING FOR EVERY HOLIDAY

Over the last few years we have become fascinated with making slime! Slime for all occasions, themes, seasons, and holidays is really our specialty.

At first I thought this slime making thing was going to be super hard, and that I would never be able to get right. But then I tried it and loved it. Of course there was trial and error involved, but we were committed to making slime as easy as possible. Then we couldn’t stop!.

If you want to see what else you can mix into slime and how to make awesome slime ideas all year round, check out our Ultimate Slime Guide Book. It’s the perfect accessory and comes with some great slime freebies as well!

Fall doesn’t end with a Halloween! I think a lot of people forget about the awesome month of November and rush on to Christmas. This year we wanted to make sure that we acknowledged Thanksgiving and the rest of fall with super cool Thanksgiving theme slime recipes.

From fluffy slime to real pumpkin slime to taste safe slime, you will love how easy our basic slime recipes are to make. Once you learn the basics of slime making, there’s a world of possibilities when it comes to themes for holidays and seasons.

Yes, in case you are wondering, we have tons of Christmas themed slimes already waiting for you here including videos which we are slowly adding to all our great slime recipes.

Below you will find the links to all our Thanksgiving slime recipes. I have also included a taste safe cranberry slime recipe from a friend of mine that I am sure you will love if you have kids who like to “sample” everything. Our regular slime is NOT edible. The cranberry slime or the marshmallow slime is a much better option.

The base for any of these slimes uses our 4 now 5 basic slime recipes (click here) with the common slime activators which include saline solution and baking soda, borax powder, or liquid starch. We even feature a couple borax free slime recipes below too!

Also make sure to check out our other
Thanksgiving science and STEM activities like dancing corn!

Click on the orange links below to learn more about each recipe and the special mix-ins that we use to complete each theme. I share the recipe that I prefer to use for the specific slime as well as helpful hints and tips. Many of these slimes also have videos. You will find complete start to finish slime videos on our Basic Slime Recipes Page 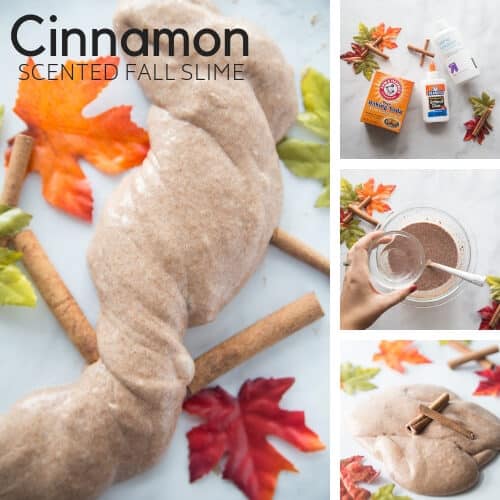 We love fluffy slime for it’s unique texture making it not only science but super sensory play for kids who love a very tactile experience! We dressed up a slime storage container like a turkey. You can get a little crafty with this Thanksgiving slime recipe. 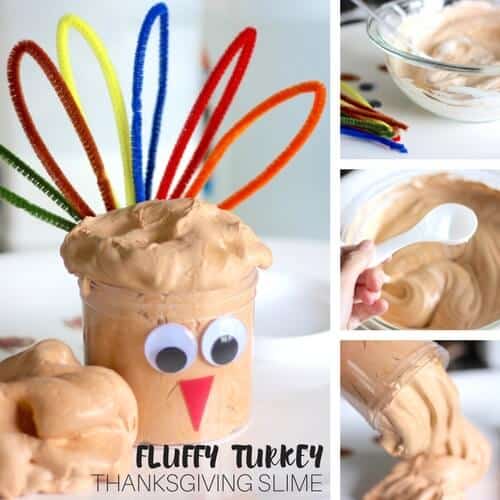 Sometimes, all a basic slime recipe needs to be transformed into a holiday slime recipe is some fun color, glitter, and themed confetti! Here we have a totally turkey slime filled with turkey confetti! 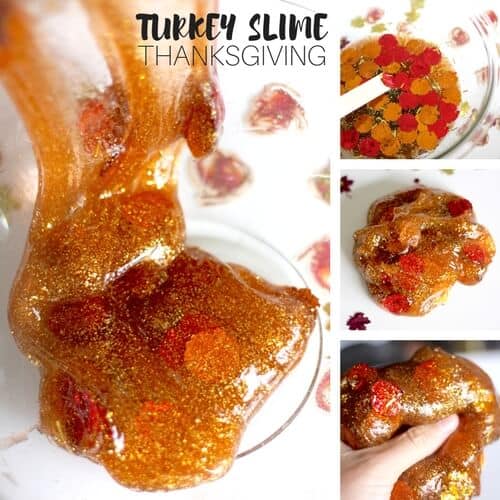 Similar to our turkey confetti slime above, we have a gorgeous fall leaves slime recipe. We love making several batches of different color slime and combining them. Take inspiration from the colors around you when you are making slime! 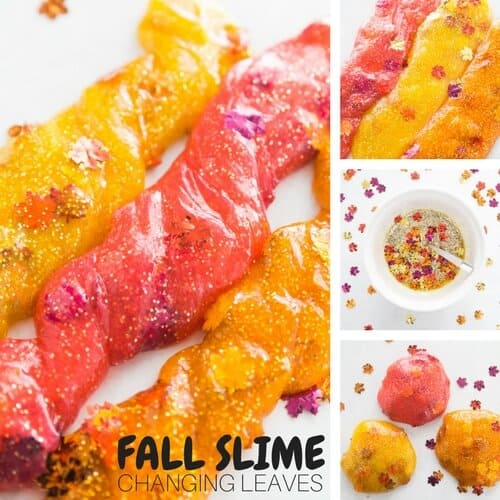 Pumpkin Slime Made in a Real Pumpkin

Whoa! This is one of our coolest Thanksgiving slime recipes in my opinion because you actually make your slime inside a real pumpkin using real pumpkin guts as part of the recipe. Kids always find this cool! 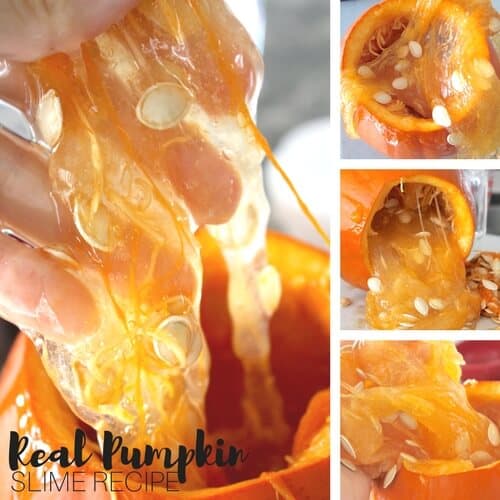 Candy corn is still popular through November! or create your own harvest theme fluffy slime. Check out the video too! 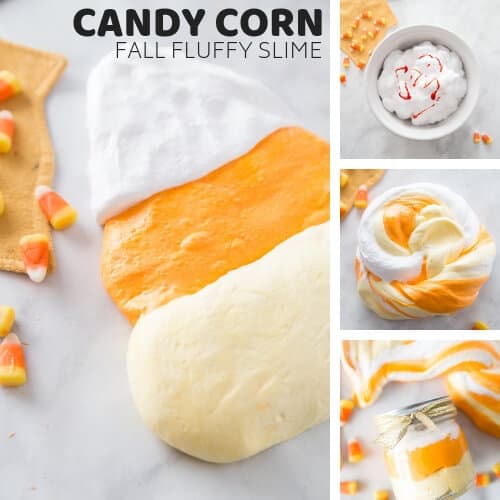 Remember, our regular slimes above are NOT to be sampled. 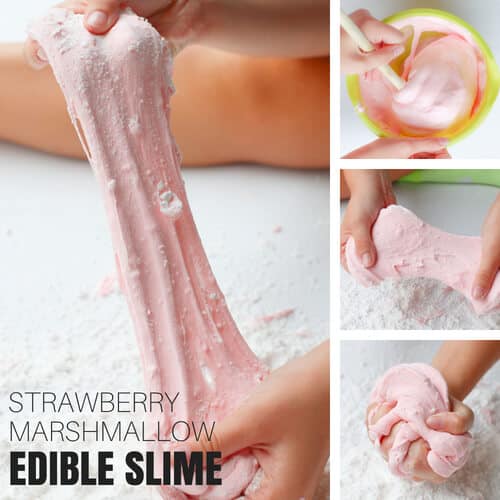 The next few recipes and play ideas are perfect for both Thanksgiving science and Thanksgiving sensory play but are not true slimes like the above recipes. However, they are definitely worth including as alternative Thanksgiving slime recipes to try!

Oobleck is a classic Non-Newtonian fluids science activity that doubles as sensory play. The best part of it all is that you have the ingredients for this recipe in your kitchen! Super simple 2-3 ingredient activity that is both very educational and fun! 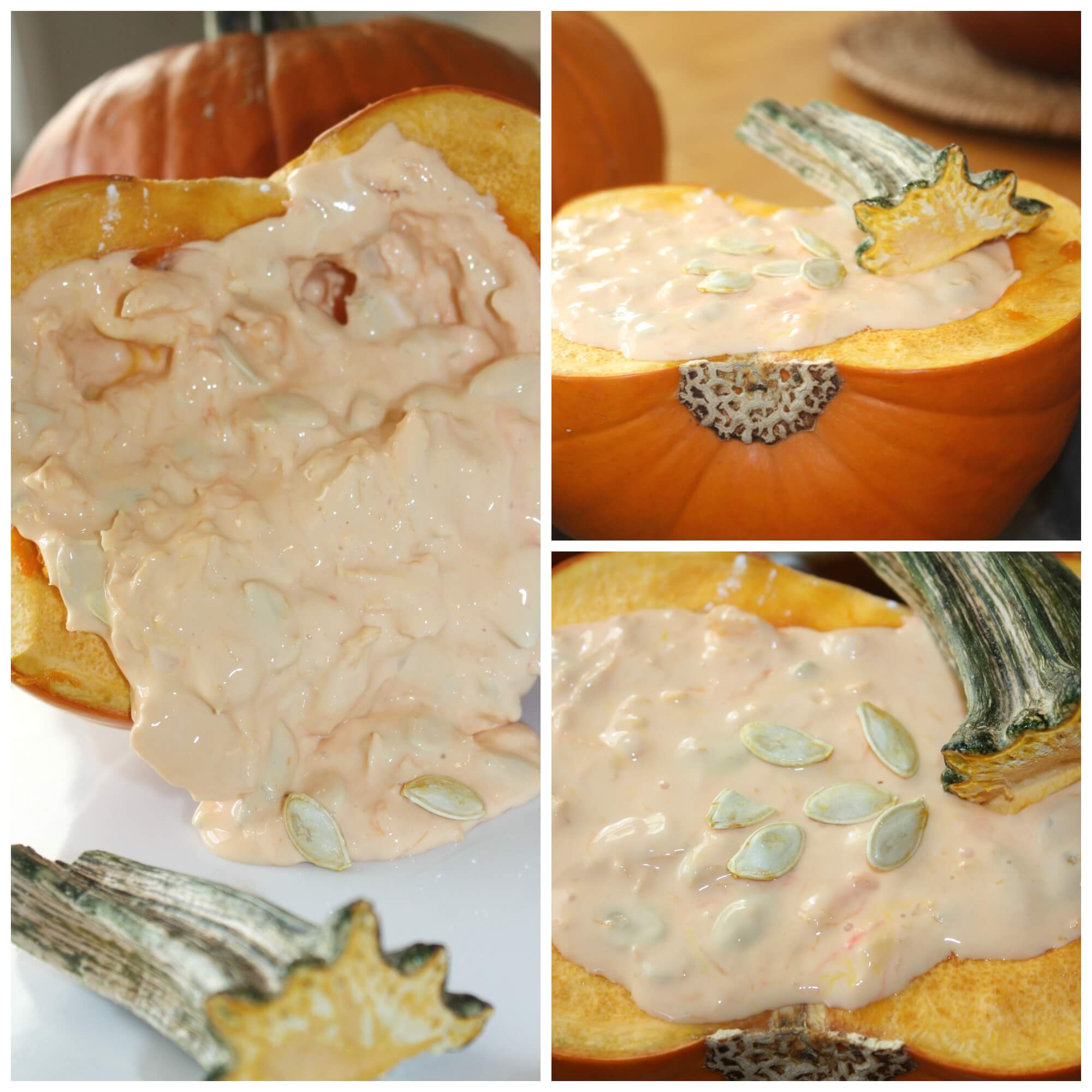 This fall themed bubbling slime uses an unique kitchen ingredient to make a gooey, slimey consistency that is perfect for both science and sensory play. 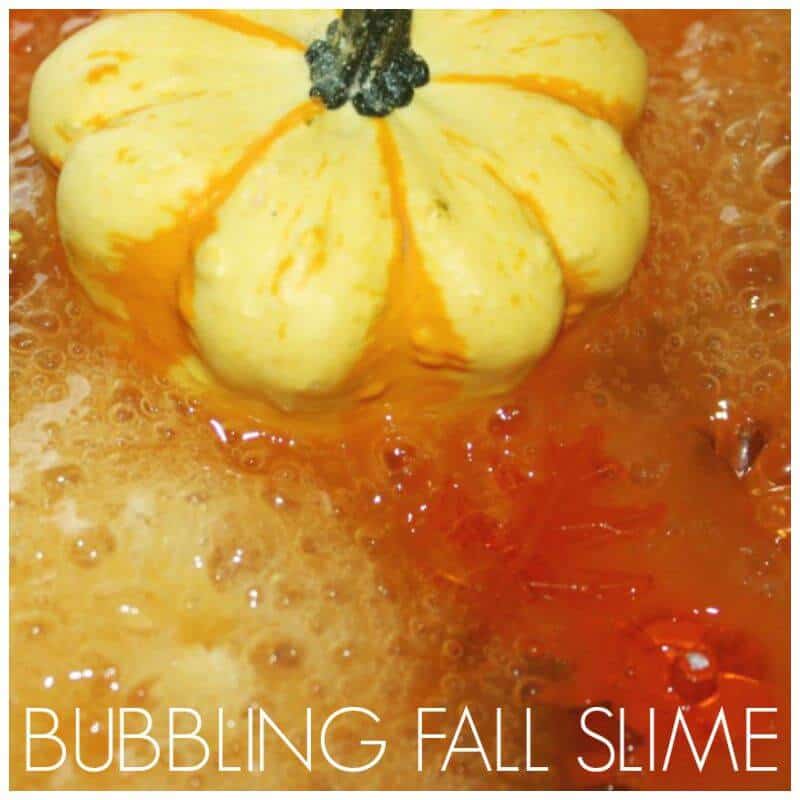 Pumpkin pie cloud dough can be another great taste safe Thanksgiving sensory play recipe for younger kids and uses basic pantry ingredients! This would be a perfect activity for an kid who wants to be a kitchen helper for pie baking but isn’t quite old enough to help! 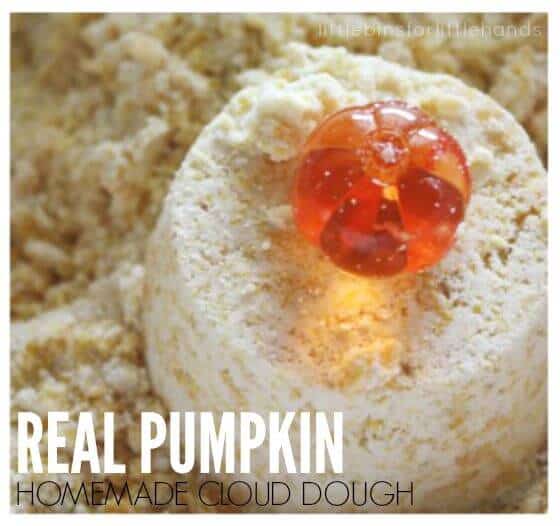 We always like to include a bit of homemade slime science around here. Slime really does make for an excellent chemistry demonstration and kids love it too! Mixtures, substances, polymers, cross linking, states of matter, elasticity, and viscosity are just a few of the science concepts that can be explored with homemade slime!

What’s the science behind the slime? The borate ions in the slime activators  (sodium borate, borax powder, or boric acid) mix with the PVA (polyvinyl-acetate) glue and forms this cool stretchy substance. This is called cross linking!

SLIME IS A NON-NEWTONIAN FLUID

When you add the borate ions to the mixture, it starts to connect these long strands together. They begin to tangle and mix until the substance is less like the liquid you started with and thicker and rubberier like slime! Slime is a polymer.

Picture the difference between wet spaghetti and leftover spaghetti the next day. As the slime forms the tangled molecule strands are much like the clump of spaghetti!

Did you know that slime aligns with the Next Generation Science Standards? It does and you can use slime making to explore states of matter and its interactions. Check out NGSS 2-PS1-1 for more information! 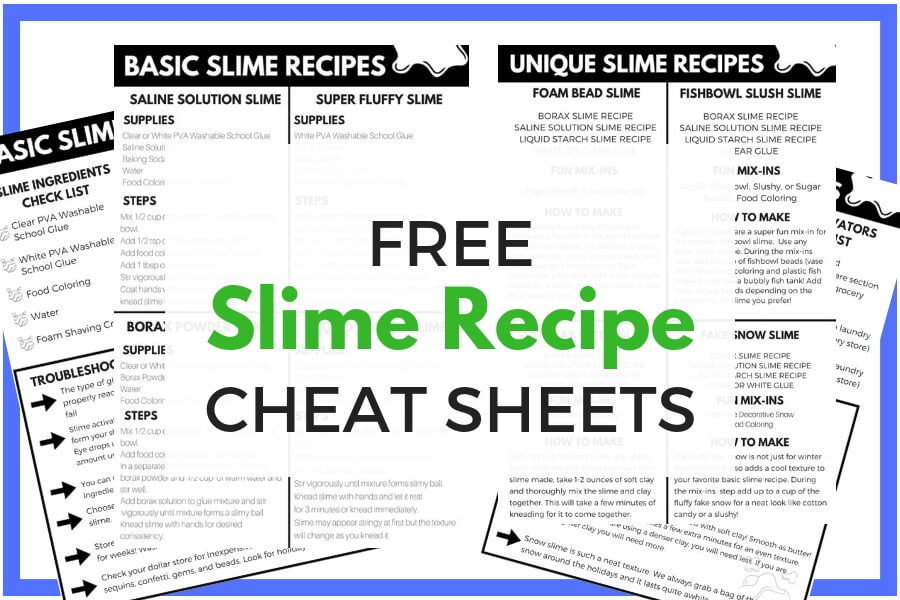 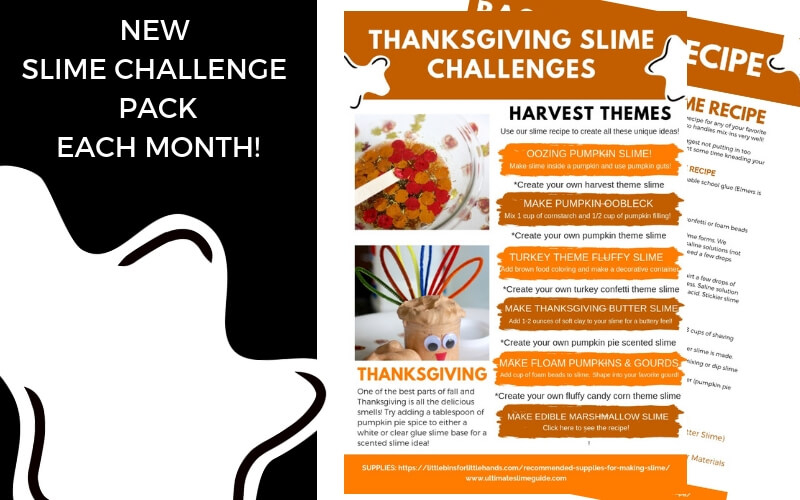