It doesn’t get much easier than pumpkin rolling on homemade ramps. And what makes it even better is that it’s also a great  simple physics experiment for kids. This rolling pumpkins science activity is so simple and perfect for a crisp fall day and is excellent to take outdoors for easy gross motor play! We have been diving head first into cool pumpkin STEM activities this fall. What can you learn from rolling pumpkins? See for yourself! 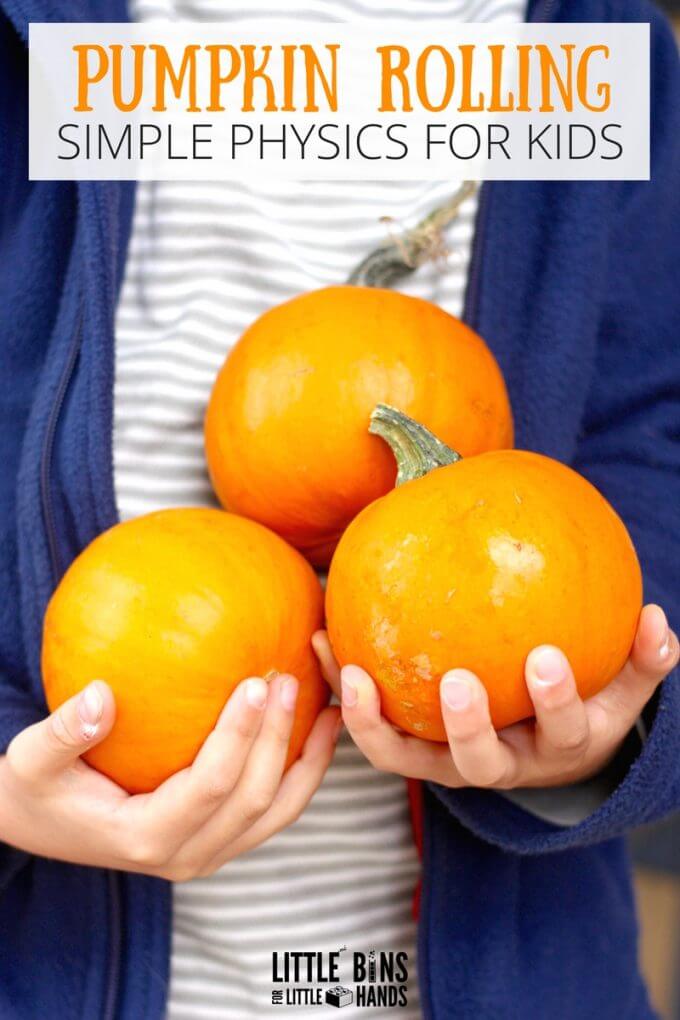 Seriously, this simple physics activity with rolling pumpkins is easy to set up because you have what you need already or it’s time to take a trip to the pumpkin patch anyway! Makes a great weekend activity and definitely will entertain kids of all ages. Possibly adults too! You can also pair it with the book Roll -Away Pumpkin by Junia Wonders.

ALSO CHECK OUT: Pumpkin Books and STEM Activities for Kids 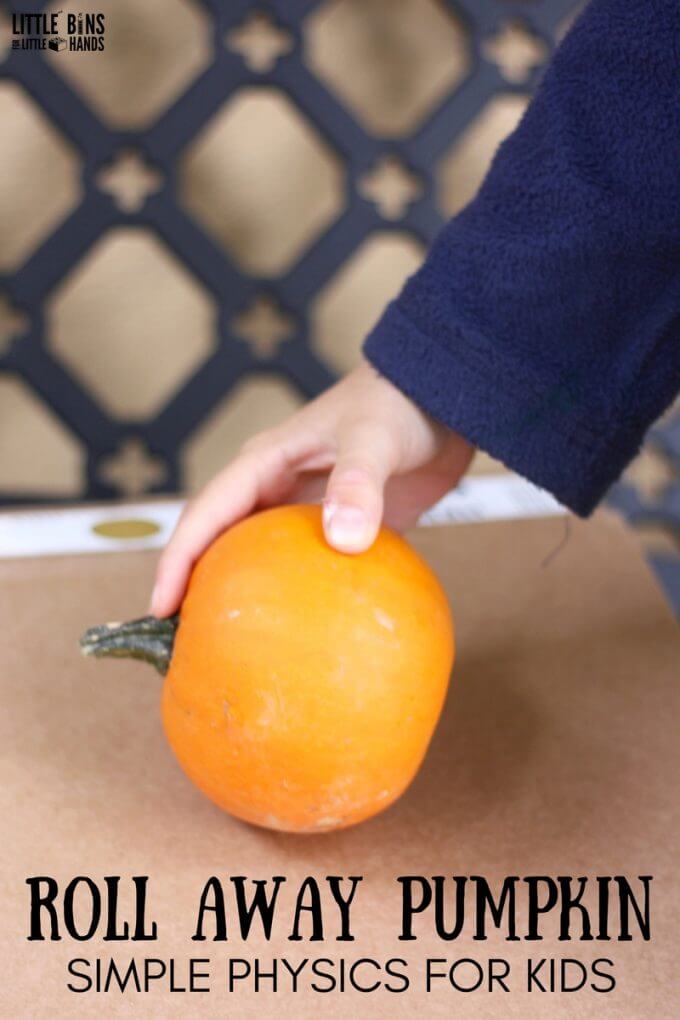 Roll -Away Pumpkin by Junia Wonders

This is a great use what you have got kind of activity. We recently took a trip to Ikea and came back with some nice cardboard boxes. Yes, there was bookcase inside one! In our house cardboard rules.

You can also use plastic rain gutters. No really! We bought some at the hardware store, and they are cool for so many kids of activities. We used them for apple races. Wood planks work too. 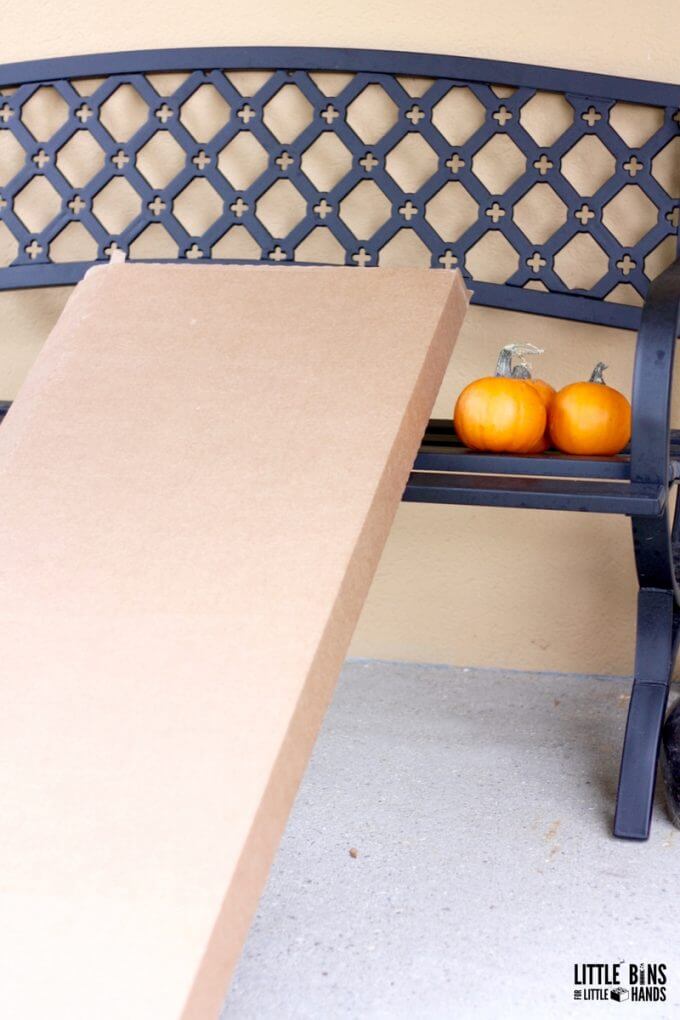 I am pretty sure your kids have this next step covered! My son did. Start rolling pumpkins! Make sure to ask your kids why pumpkins roll? 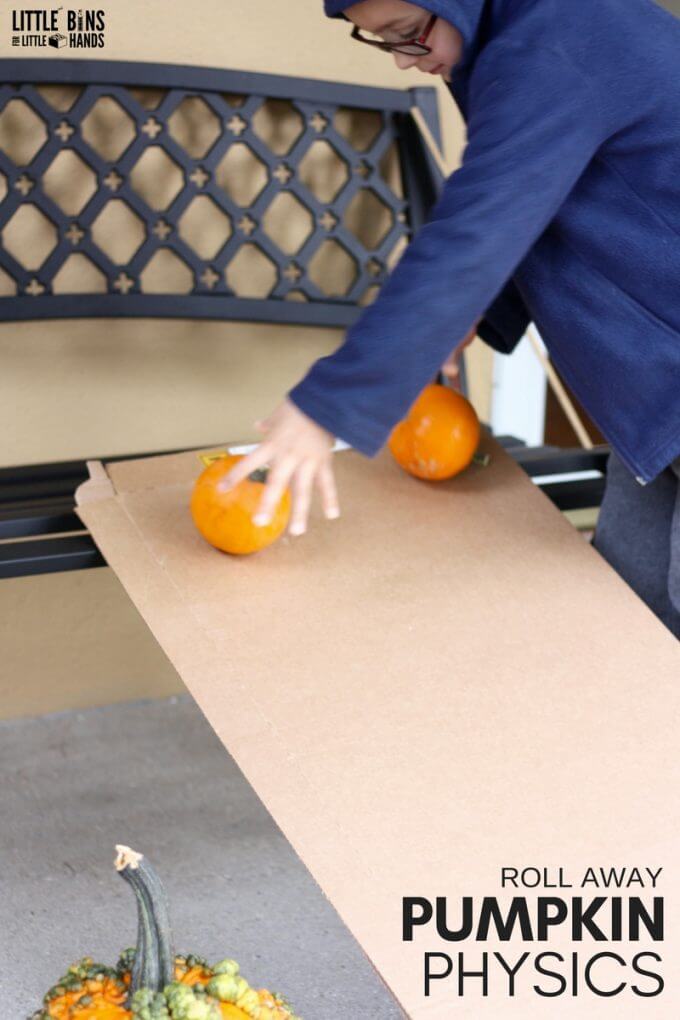 You may find your pumpkins rolling off the edge. Challenge your kids to find a way to keep the pumpkins on the ramp. What happens when you change the angle of the ramp? Does the pumpkin pick up speed? Read more simple science below. You can also grab a tape measure and check out the distance your pumpkin traveled.

What happens when you roll a pumpkin uphill or downhill. How does force, motion, and  gravity play a part? Gravity is also a force and the angle of our ramps plays a part in the pull of gravity on the pumpkin. We put our pumpkin into motion!

This is an excellent opportunity to talk about force and motion. In order for something to move, it needs a force. This force can be a push or a pull. The amount of force will determine how something moves and at what speed. Here we are getting the pumpkin rolling but also gravity is pulling them down the ramp.

The laws of motion tell us that an object will stay at rest until a force is presented, and that every force creates an equal force. If we need to push the pumpkin to get it rolling, our push is the force. The size of the push will also determine the distance traveled or the speed. 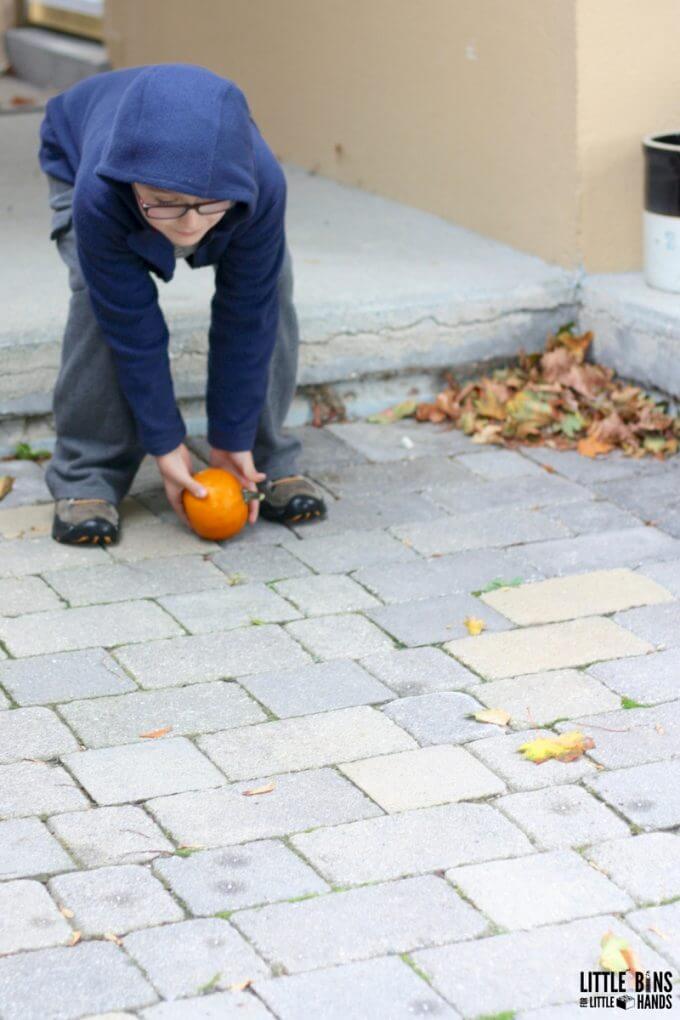 Friction plays a part in all of this too! Rolling in pumpkins on the grass is quite a bit different than rolling pumpkins on the pavers. The friction between the grass and the pumpkin will slow it down. If you roll your pumpkin over a thick towel will it also slow down? Do you need to apply a greater force to get your pumpkin moving? 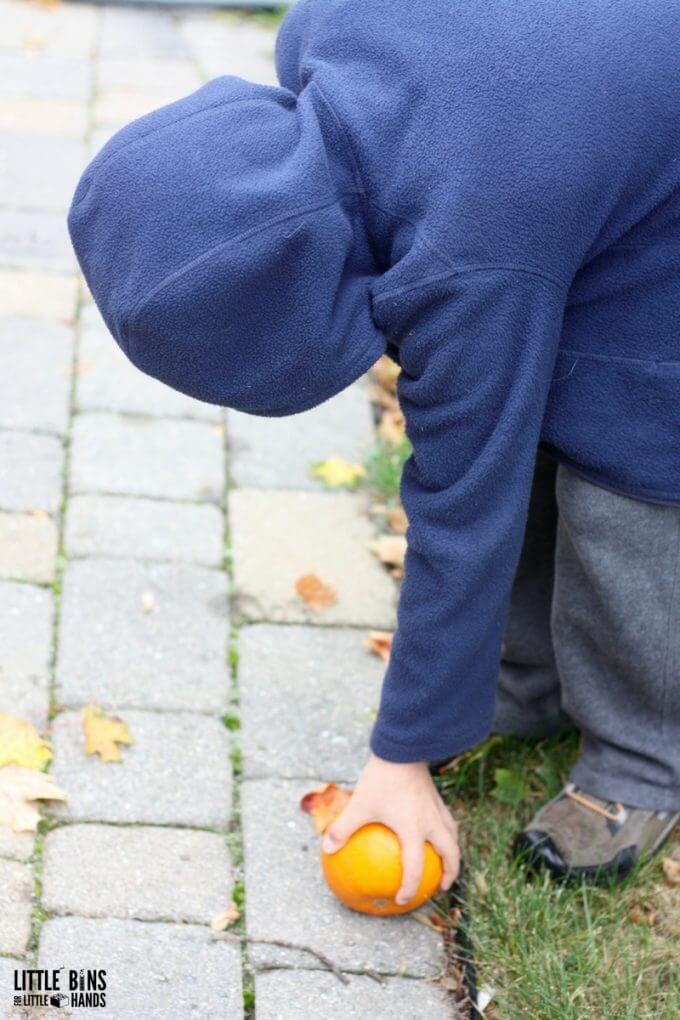 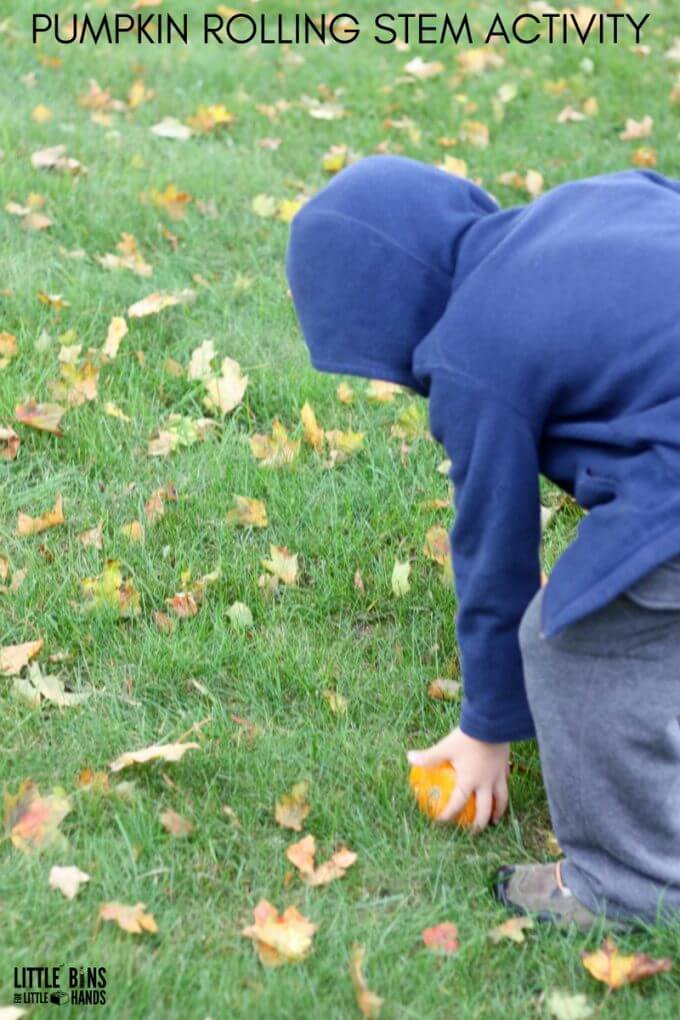 So after a trip to the pumpkin patch and a nice day to be outside, you have also learned a little bit about forces and motion for simple physics. But most of all, the whole family had fun.

This can also be a fun idea for a pumpkin themed classroom science activity. Since you already have the pumpkins, try turning it into a pumpkin bowling activity {use empty soda bottles} or add paint for an interesting pumpkin rolling STEAM project that mixes art and science. 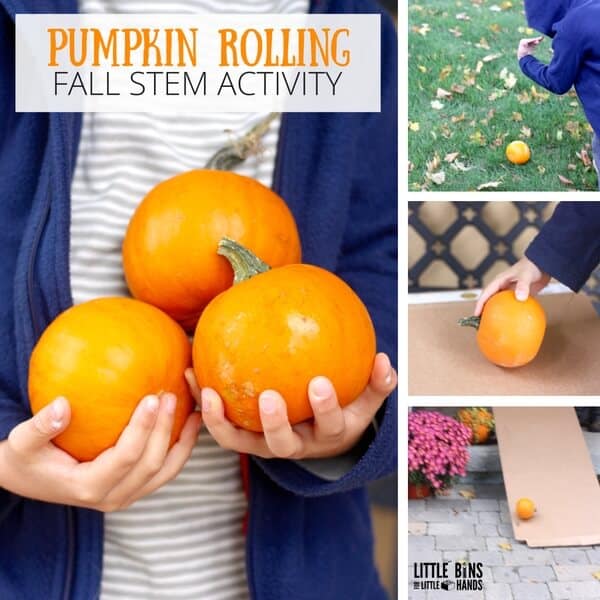 Click on the pictures below for more fun ways to use those small pumpkins for STEM. 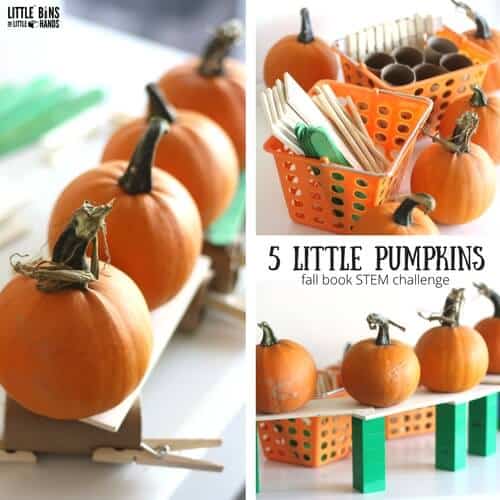 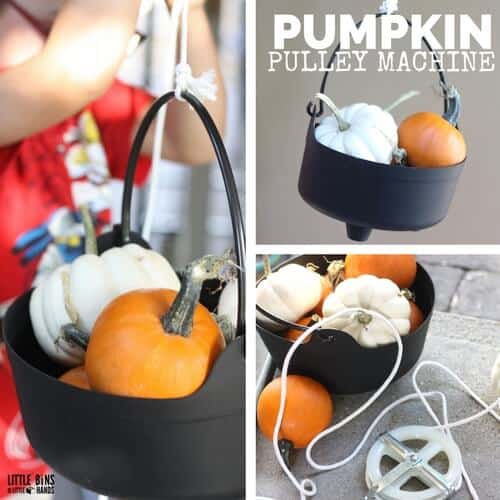 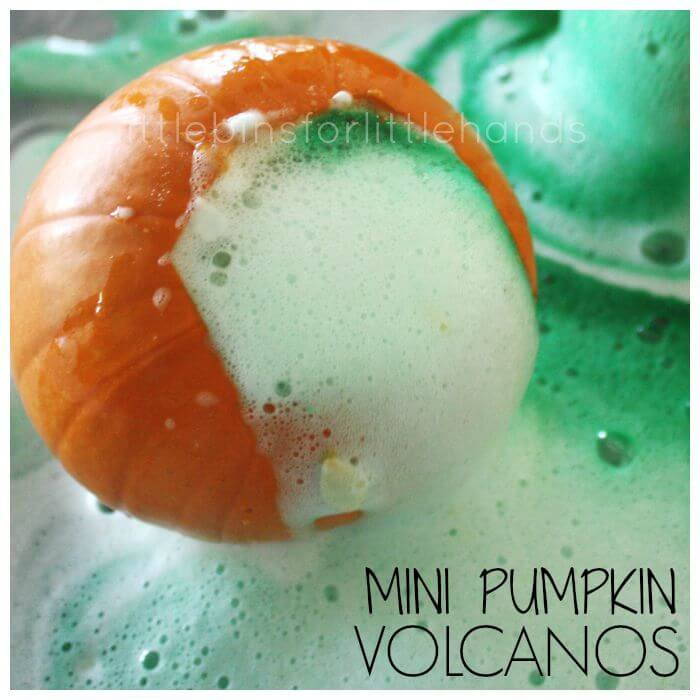 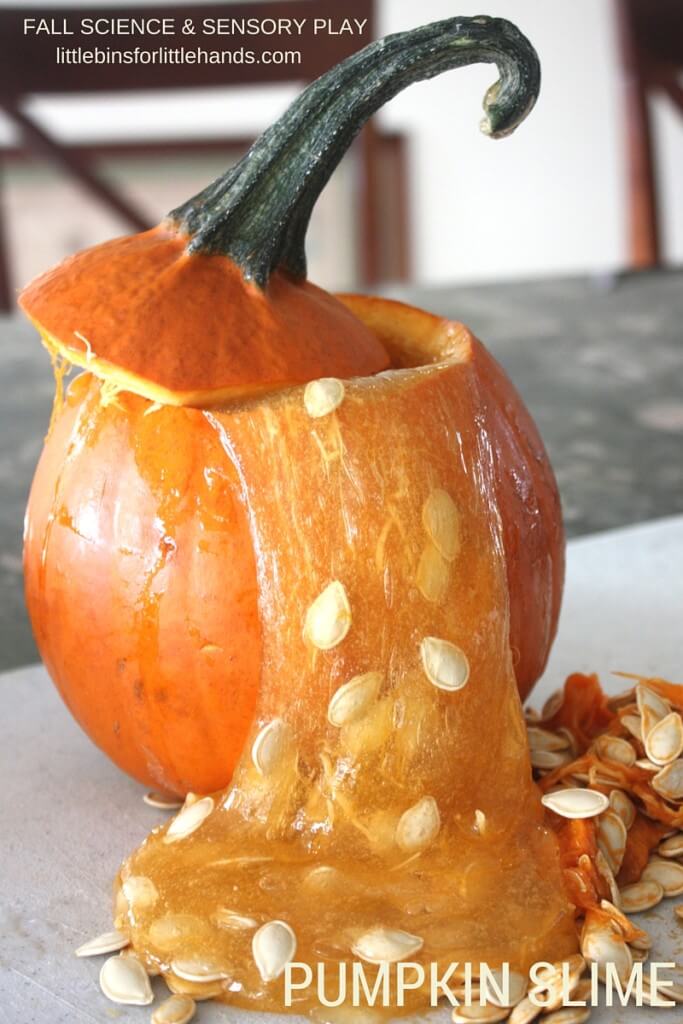 White Pumpkin STEM Activities for Kids
Next Post: Homemade Checkers with a LEGO Checker Board Game