Nothing says oozing homemade slime-like bugs! Use any of our clear slime recipes to create your own bug slime perfect for insect enthusiasts or an easy spring or summer-themed slime. Homemade slime is a snap to make with our easy slime recipes! 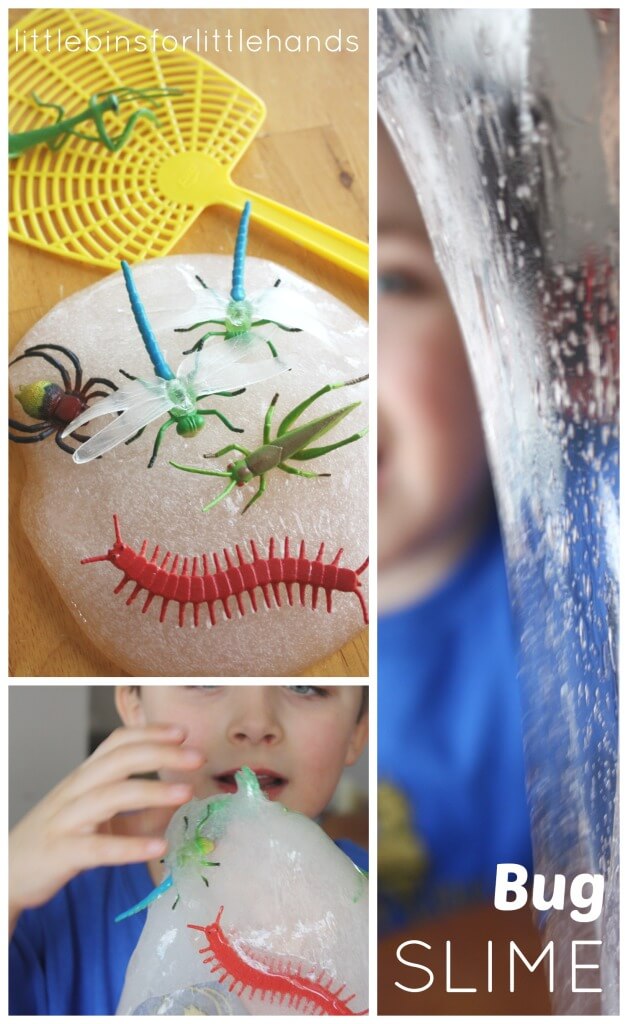 Spring will be here before we know it, and this bug slime is awesome sensory play for all the creepy crawly fans out there. Make sure to check out our cool Rainbow Slime too!

Because we have been making slime for years, I feel extremely confident in our homemade slime recipes and want to pass them along to you. Slime making is a bit of a science, a cooking lesson, and an art form all in one! You can read more about the science below.

THE SCIENCE BEHIND SLIME

What’s the science behind the slime? The borate ions in the slime activators  (sodium borate, borax powder, or boric acid) mix with the PVA (polyvinyl-acetate) glue and form this cool stretchy substance. This is called cross-linking!

The glue is a polymer and is made up of long, repeating, and identical strands or molecules. These molecules flow past one another keeping the glue in a liquid state. Until…

When you add the borate ions to the mixture, it starts to connect these long strands together. They begin to tangle and mix until the substance is less like the liquid you started with and thicker and rubberier like slime!

Yes, he added a fly swatter to our bug slime! Believe it or not but this bug slime was my son’s idea. Definitely not what I would think up. However, it turned out pretty cool I think. Bug slime is the perfect way to welcome Spring too!

We love clear slime! This bug slime was pretty cool with the sunlight shining through it!

He really developed a great storyline with this bug slime sensory play. Simple plastic bugs are an easy addition to slime!

Slime bounces too! It’s lots of fun apparently to roll it into a big bouncy ball and bounce it all around. See our bouncy ball recipe!

Need an edible or taste-safe version… How about this pudding slime with gummy worms?

Make sure to wash hands thoroughly after playing with slime.  If your slime gets a little messy, it does happen, check out my tips for how to get slime out of clothes and hair!

How To Make Bug Slime

STEP 2: Now’s the time to add color with food coloring if you want to.

Store your slime loosely covered in a plastic container for a good week of bug slime play as shown above.

Click on the image below or on the link for more spring science activities for kids.